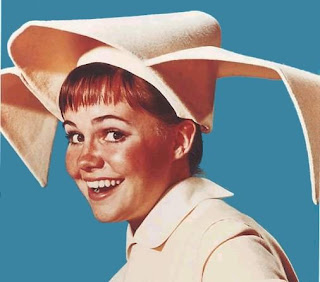 At 69, I have come to realize that wisdom does not come in one awe-inspiring moment...it creeps up on you in stages. This morning, over my first cup of coffee, and while trying to validate Einstein's Theory of Relativity, I began to think about how we can gauge our degree of wisdom by TV programs you finally realize are so inane, so stupid that you absolutely refuse to watch them.
My first tentative step toward wisdom occurred when I was about 15 years old...and it emanated from an old 17inch RCA black and white television. (I was aided by a little brother who could stop and hold the rabbit ears just right so that KJEO came in crystal clear.....I told him holding rabbit hears for hours on end would stimulate his growth).
While I was stupid enough to believe that vampires actually existed, and while I was sure there was a Dr. Frankenstein doing strange things in his basement somewhere in Bavaria, I drew the line on Sally Field flying around Brazil by the simple effort of catching a good breeze and adjusting the wings of her big white cornette (yes, I actually googled to see what it was called). So after watching the first five minutes of The Flying Nun I surrendered my vows and promised myself to never watch again, even if the only other choice was an Indian Head test pattern.
And still the rube, I had no problem swallowing the idea that Flipper was smart enough to score an advanced degree at Miami U while defusing contact bombs stuck to the bottom of a cruise ship in his spare time. And I was fifty years old before I finally realized that Lassie was never really looking at Timmy....the dog was focused on her trainer and noted Timmy only when Timmy had onions on his hot dog for lunch off the crew truck.
But, when My Mother The Car came along, even I was smart enough to realize the likelihood of a mother achieving reincarnation as a 1928 Porter touring car was pretty small...and even the idea was pretty stupid. This was 1965 but I have to believe the TV producers of this program got a head start on Timothy Leary and were scoring some serious LSD when that program was conceived. 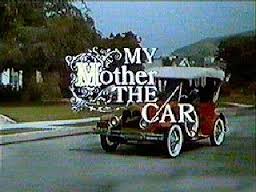 So, I got through my teen years with some small measure of wisdom....my standards were low but at least I had some.
Then the late 70's and early 80's came along and I'm ashamed to say I loved watching The Love Boat and Fantasy Island. I think I liked those shows because they resurrected some of the old celebrities who were big in my childhood; Van Johnson and Gloria DeHaven taking a cruise to celebrate their divorce, or Shelly Fabray as the first "cougar" dating a handsome young stud who was secretly lusting for her great aunt's inheritance. Shelly would eventually discover his true character, saved at the last minute by Gopher and Doc. And who could resist little Tatu and his speech impediment, or Ricardo Montalban fondling the rich corinthian leather of his golf cart?
As I recall, I finally gave up on the TV "smaltz" about the time I could no longer pee in a 3ft arc which was probably about age 40. It seems I finally realized that if I wanted to watch someone with an IQ above 80 I would have to watch PBS or a good Steven Bochco program; L.A. Law, Hill Street Blues, or Doogie Howser.
Now, in my old age dotage, I've refined my viewer wisdom even finer. I have something like 150 channels but watch only a few; PBS, C-Spans I, II and III, Turner Classic Movies and any baseball broadcast not involving the Dodgers.
Still, I occasionally do flip thorough those 150 cable channels, and sometimes pause to watch 30 seconds of The Munsters, or a minute or two of Green Acres (and wonder why Eddie Albert didn't just hire a good foreman...and why anyone would be so stupid to tolerate having to climb a telephone pole to call for pizza.)
So, I guess I'm, if not wise beyond my years, have a least figured out that watching much TV (in any era) will rot you teeth and pickle your brain.
Gotta go...it's 5:30 AM and Twilight Zone is getting ready to come on. It's the episode where Charles Bronson is wandering around a post-armageddon ghost town and hooks up with Elizabeth Montgomery.....and in that whole episode she doesn't twitch her nose even once!

They must have used up all the "Good" ideas for TV shows back then because the crap they put out now is beyond belief. Other than an occasional Blue Bloods, and 30/30 on ESPN, my TV stays off. Can't take the music of today either. Now I know how my parents felt when the switch from Big Band/Swing to Rock and Rolls occurred. Dreadful. But they don't know anything else just like we didn't back then. Three Stooges, Bowery Boys, Laurel and Hardy begat some wonderful Comedy shows(you mentioned many). They were entertainment(though I agree on Flying None). Saturday mornings were a happening. Sky King, Rin Tin Tin, and a lot of the old serials (Flash Gordon etc) made TV noteworthy. Now, it's just another day.

Frank, the TV wonks fill their programming largely these days with reality stuff...or dancing and singing. Guess I'm just an old fogie but the TV's not much of a draw for me anymore. Thanks for the Saturday morning memory....those might have been the best Saturdays ever.

Reality=Laziness/no talent. They don't need to think/create with today's shows. No Writers necessary. We've progressed back to the Stone Age. Sad.

Same here - I'm 57 and despite having satellite TV with about a billion stations - THERE IS NOTHING TO WATCH. The comedies aren't funny, the dramas are predictable and boring, the language and sexual content are disgusting (trying to compensate for bad writing, IMHO). So, I don't watch it, I read instead. A synopsis of society - all the alternatives, none are worthwhile.

Randy, I keep Amazon prosperous filling my Kindle and read quite a bit also. Funny...we seemed to have far more when there was but three channels.