The Gipper By The Numbers 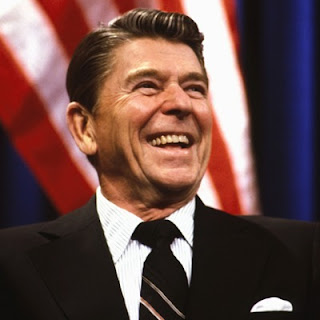 The Liberal Left are known for telling lies.  The facts failing them, they resort to fiction whenever possible.  I believe the biggest lie they've ever told has been their attempt to disparage and demonize Ronald Reagan.  Why are they able to get away with it?  Because today's Millennials are as ignorant of recent history as they are about our founding.

Let's explore where Ronald Reagan's support came from by looking at the voting groups who voted for him.  First let's look at how Reagan won in the first place....how he drove Jimmy Carter out of office after one term.

1977.  It's been 43 years since Jimmy Carter won election.  Upon assuming office the first thing Jimmy did was to lecture his cabinet about how he knew more about their job than they did (does that ring a recent bell?).  And for the next four years Carter succeeded in scaring the hell out of our allies, allowed the economy to tank so badly we were paying 20% for a home mortgage and retirees were losing the buying power of their fixed pensions with 16% annual inflation rates.  Abroad, Iranian Mullahs invaded our embassy and held them hostage.  And, instead of taking responsibility for any of that mess, Carter chose to go on TV and lecture us about being selfish and in a moral malaise.

By 1980 anyone who came along and had a positive message was a slam dunk for electoral victory.  Well, Ronald Reagan was the poster boy for positivism, his most winning message, "there's nothing wrong with the American people...that are best days are ahead of us."

Well, in the Presidential election of 1980 Reagan won the conservative vote, as expected.  But he also pulled in what are now known as "Reagan Democrats".  And he won the youth vote, scored well with Hispanics and even got 14% of the Black vote.

Now the Democrats say Reagan's Presidency was horrible.  Well, then let's take a look at how Reagan did in '84, after four years in office.

Look at those numbers, folks!  Can you imagine a Republican today getting 61% of the 18-24 year old vote?  By god, they called him "Grandpa Reagan" and loved him!  Look at that last number...under "Political Philosophy"...Reagan won 29% of the liberals, 54% of Moderates and 82% of the Conservative group.  And except for the "welfare queens...(less than 12.5k income per year) Reagan won every economic group.  Reagan went on to win that second election in a landslide...taking 49 states, Mondale winning only his home state of Minnesota. 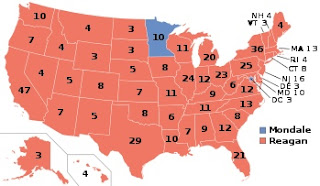 I feel sorry for the Millennials once they grow up and are forced to work and pay taxes, read a little history...and actually find out their party has been lying to them for half a century.
Posted by A Modest Scribler at 2:00 AM

Clearly Reagan will go down as one of the best Presidents. Today we are in a very Sad situation and the Republican Party would Not nominate him. He was too sane, too sensible and a Great Communicator who inspired us all.

Isn't that sad, Jerry. Today, when everyone's hackles are up, there seems to be no common ground. Fat ole Tip O'Neil and Reagan met three times a week for a shot of Irish whiskey and seemed to come to compromises.

To my blog readers; I apologize for this chart. It is not how I laid it out. As Google blog has laid it out it is worthless.

Had to delete the charts I had on this blog. Rows and columns were skewed and unreadable. Sorry, guys.

I, like you, was on active duty when RR was sworn in. The money that hit about a year after was unbelievable - my first squadron building was constructed in 1944 as a temporary structure (and this was 1983). We were flying once every 7-9 days and proficiency was, um, "iffy". Within a year, we had a new building, our mission rate was about 5 times what Carter's budget allowed, and the morale - well, you had to experience it. I know, anecdotal evidence, but the mood of the country mirrored that of my flying squadron - people were optimistic about the future again. TBH, I haven't seen that in decades, certainly not with the "Hope and Change" impostor we just finished with. I don't know that we'll see it again, but politics turns in unexpected directions. The likes of Reagan, though, he won't be seen again. Shame.

I can attest to everything you experienced in that first year, Randy. It's been so long since we've had such a national uplift in spirit like that. I felt it as a kid when JFK was elected after all those old men before him.