On Boiled Tofu and Broccoli 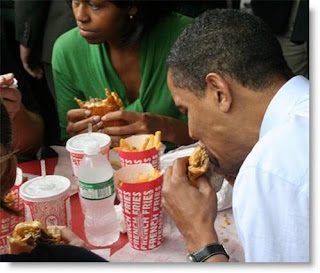 Specifically Michelle said Trump wants our school children eating "crap".
This is exactly how liberals distort the truth to advance their own causes. Trump did not say school districts can't serve broccoli and brown rice and boiled tofu if they wish...he merely revoked a mandate that said schools HAVE to or suffer the withdrawal of federal funding.
By what right do Washington bureaucrats have the right to demand what is served in a school cafeteria line? It is almost silly that states should have to argue states rights under the Constitution but that's what it has come to these days. An overbearing, intrusive Washington D.C. believe they know what's good for everyone....even as, under Michelle's nutrition program, kids were dumping tons of "health food" in the garbage.
So was Trump telling kids to eat crap? No. On the contrary, Michelle was MAKING kids eat crap even as she and Barry dine on burgers and fries.
Sad. Damned Sad.
Posted by A Modest Scribler at 2:00 AM

somewhere on YouTube is a feature offering photos of school lunches around the world.
it is actually pretty interesting. I remember mine from over a half century ago. We had a real kitchen with three real cooks and everything was made from scratch. It was very good food
I doubt that is the case any more.

Yep, Jerry, our cafeteria cooks were the mothers of students in school...and they were great cooks. I loved that cafeteria food. And you're right...meals were made from scratch, just as they were at home. I'm convinced it's the processed foods today that are making kids so damned fat.

out of curiosity, have you seen Michael Moore's "Where to invade next"?
he has a story on school lunches, and other stuff. It is pretty good,
even if you don't like him!

Jerry, I try to be open minded. I really do, but I avoid Michael Moore at all times. I just got sick imagining his face in my head.