To My Liberal Friend, Jerry 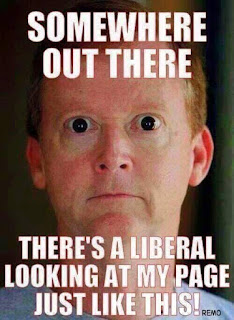 You and I have had innumerable debates about $15 dollar an hour burger flipper salaries. While I have argued that flipping burgers should never be paid career wages, and that those jobs ought to go to enterprising teens to instill a work ethic, I am willing to reveal a  point in your favor in this ongoing debate.

As you may remember, in Arizona's last election, an immediate $2 dollar an hour bump in the minimum wage took effect last January, with further increases scheduled in the next few years.  I voted against the measure but lost.

However, in an effort to be "fair and balanced" I have to tell you that I've seen a notable change in both employee demographics as well as a pleasing improvement in customer service in the admittedly small sampling I've seen since the wages were bumped up.

So, a couple of months ago I ventured out to my nearby McDonalds...fully prepared to receive a flattened down, lukewarm Quarter Pounder, accompanied by a paper chute of cold french fries.  Well, a change was noted as soon as I pulled into the drive-thru.  First, greeting me at that electronic ordering speaker box was a voice free of Hispanic inflection, and readily understood.

Next up was the pay window where I was greeted by a fresh-faced "gringo-teen" wearing a smiling face with real cheer in her voice.  This high school teen seemed genuinely glad to take my money and even offered a thank you upon receipt of it.  Then, upon pulling up to the delivery window, I'll be damned if a second non-hispanic team member smilingly delivered to me a hot sandwich and hot crispy fries!

Well, imagine my surprise, Jerry, when the same thing happened at my local Carl's Jr!  While the sampling was small (so I'm not ready yet to admit being wrong), I was a little impressed that a few extra Washingtons was all it took to lure American teens back to the work force, and illegal hispanics back hanging at the front of the Home Depot parking lot!

Of course my sampling was marred by the Mexican hovel known as Burger King further down the street.  And I found the local Jack in The Box crew to be as surly as ever.  Still, I'm holding out a ray of hope that you are right and I am wrong about "filthy lucre" bringing about better service and better product.  It seems that, when employees are forced to pay more, they are more selective about who the hell they hire.

So, Jerry...my liberal friend (folks, I don't think Jerry's really a liberal...I believe he's a closet conservative), there may be a small ray of hope here.  We might....just might..solve our illegal immigration problems, simply by bumping up the hourly salaries enough to lure Americans back to work...and illegals back to Mexico.   For that I'd gladly pay a buck more for my Quarter Pounder.

Sometimes I am and sometimes I'm not. Clearly I am very conservative and totally out of the closet when it comes to spending money or leaving trash on the street! Thank you for thinking about me! Did you ever read the story about McDonald's and Russia? The biggest McDonald's in the World is in Moscow! But first McDonald's had to create schools to teach their new employees how to smile and be polite! They also had to create paper factories to make the napkins because Russian napkins were too much like sandpaper. They taught the Russians about Russet Potatoes and how to plant them. McDonald's and probably Coke and The Beatles radically changed Russian Society. I suspect that private industry is pretty smart and they are doing that here as well. Even Walmart and Target are in favor of higher wages! It is the American Way: Earn More, Spend More!

Yes, Jerry, I had read about the necessity for Russians to learn the art of customer service. I thought those little tidbits were so telling in defining the differences between an open society and one that had been closed off for nearly a century.

I think the increase didn't turn out like the Liberals planned. They thought the extra $'s would go to the Illegals/Hispanic/anyone but White population. The plan backfired. But, in saying that. It's great to see you two play nice. Now if only you can convince Washington that helping people is what they should be doing together. ALL people. They spend too much time(and our money)on hate. I don't vote for someone so they can go to battle. I vote for them to make things better in this Country. Yes. Even if it makes it better for the Illegals. Hold hands and figure out Healthcare. Can that be this difficult? How do we clean up Cities that are deteriorating(Detroit comes to mind)? Shame on Politicians for conveniently forgetting why they are there. Time for more change guys. Trump was just the beginning.