Interview With My Mother 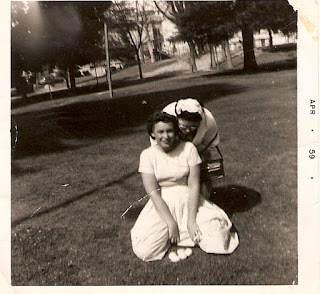 My mother, Encely Ann Jameson Friend, was born on the 10th of July, 1922 in Enid, Oklahoma.  She died in October, 2002.  Though she is gone now, thanks to my inexplicable curiosity about my family's ancestry, and my mother's willingness to share it, I feel confident that this interview is essentially accurate.

Dearel:  Mom, can you tell me a little more about where you were born and about your girlhood?

Mom:  Honey, if you're looking to hear some great adventurous yarns, well, you'll be disappointed.  I was born in a little town called Enid, Oklahoma.  Enid, back then was known for the wheat crops that thrived in the area and was the starting off point for The Great Cherokee Run...the pioneering land grab that sowed the first seeds of white settlement of the Indian Territory.  My father, half Cherokee himself was the product of a White man and a Cherokee woman.  I'm sorry that I don't know more about my fraternal grandparents.  My mother was Myrtle Jane Payne, daughter of the Payne clan who settled in the Missouri Ozarks in the late 19th Century.

Dearel:  Tell me more about your childhood.

Mom:  I don't really remember much about my early childhood.  I do remember that my father had a drinking problem and that didn't set too well with my Southern Baptist mother.  I think I may have purposely shut out the memories of those early childhood years because they proved too painful.

Dearel:  I know that Grandmother Myrtle divorced Robert in the late 1920's so you must have been very young at the time.

Mom:  Yes, I was born in '22 and my brother Floyd came along in '26, then shortly after that my parents divorced.

Dearel:  Well, we know your mother would meet and marry John Archibald Friend a few years later.  Can you remember anything about that time?

Mom:  By the time I met your fraternal grandfather he was already in his mid-30's.  He was a small framed man, gentle by nature, soft spoken and, at the time he met my mother, was raising a large brood of children by himself, his first wife (also named Myrtle), Myrtle Bargay, died very young in the great Asian flu epidemic of 1918...a flu that killed millions around the world in that year.

Dearel:  You left the Enid area about that time, correct?

Mom:  Yes, although our stepfather John came from a line of Friends who had settled the Ozarks early in the 18th century, were considered "land-wealthy", John himself was something of an itinerant farm worker.  From Enid we seemed to be moving south, then west from Enid, taking up sharecropping in tiny settlements throughout central Oklahoma, before finally settling in the Prague, Oklahoma area.

Dearel:  And what was life like for you during those years?

Mom:  Well, you've heard me talk about The Great Depression many times.  Times were hard.  No one had cash back then.  Most of the commerce was through trading in commodities.  In those sharecropping days we raised corn, cotton when there was a market for it, then wheat when the prices were good.  Mama raised a vegetable garden, then canned everything in the summer to get us through the winter.  And we raised hogs and chickens and Papa smoked the pork and any game hunted in the area.  As Papa's older children became grown and married off, the younger children came along..first Billy, then Polly and later, Paul Francis.

Dearel:  Who was the disciplinarian  in the family?

Mom:  Oh it was all Mama!  Papa just could not bring himself to spank us.  But Mama made up for it...she was the taskmaster and wielder of the switch!  The closest Papa ever came to whipping one of us was when little Billy poured out Papa's corn liquor that he hid from our Baptist mama down by the smokehouse.  Papa went down to have a snort one Sunday morning and found Billy had dumped out his  corn liquor and pissed in the jug.  When Papa saw Billy smirking about it nearby he chased him all the way to the house, but lost the foot race and then couldn't spank Billy lest Mama found out why.

Dearel:  Did you go to school?

Mom:  Sure we did.  Floyd and I attended a little red-brick one room schoolhouse, then came home to do our chores...alot of it hoeing cotton in season, or working whatever crops fertile at the time.  Sometimes we worked all day on Saturdays and sometimes, if the work was done for the week, we'd knock off, load the mattresses in the wagon and go down to the creekside and camp for the weekend.

Dearel:  My Uncle Floyd says you were a "wild child"...a tomboy who liked to mix it up with boys and that roustiness earned you a nick-name.

Mom:  Well, you already know my brothers and sisters and my mama called me "Tommy".  They've called me that all my life and I guess they'll call me that till I'm buried.

Dearel:  Did you get along with your brothers and sisters?

Mom:  Well, you know I didn't have much cause to mix it up with Billy and Polly and Paul.  They all came along later and were way too young to be my playmates.  But Floyd and I were very close.  We loved each other dearly, but we fought as brothers and sisters will do.

Dearel:  Come on, Mom.  Don't give me the "sweetness and light".  Floyd has already told me about some of your infamous squabbles...like the time you nearly amputated his toes.

Mom:  Well, he almost deserved it.  It was a Saturday and we had cotton hoeing to do.  But Papa had told us if we finish the rows he's assigned us we could quit at noon and ride into town.  I was working furiously that morning because I really wanted to have the afternoon off.  Trouble was, Floyd didn't want to work.  Instead he would find a tree stump, climb up on it, then began preaching church sermons, trying to copy our fire and brimstone Baptist minister.  Then I would scold him and he'd work for a bit, then think up another commandment to preach about and find the nearest tree stump and commence preaching again.  I'd finally had enough, then swung my hoe his way.  It came down and sliced through his boot which sent blood spurting up out of his shoe.

Dearel:  That wasn't the last time you savaged your younger brother, was it.

Mom:  No, there was that time he tore the head off my raggedy ann doll and I took him by the ears and slammed his head time and again against the bedroom wall.  Trouble was, I didn't know that there was a big ten penny nail sticking out of that wall, and with each slamming of his head I was carving out a nail sized hole in the back of his head.  I have to say though, whether if was toe amputations, or head banging, Floyd never run off and told on me.  He knew he deserved it.  I was hard to get angry but if Floyd teased me long enough he knew he could get me to blow my top.  That closeness never left us though...all our lives Floyd and I had deep love and respect and a special closeness that few have.

Dearel:  Okay, mom.  It's time.  Time to explain why you chose to surrender your childhood and marry at the age of thirteen.

Mom:  (Looking down, much reflective...a bit sad).  You know, son, I was not much different than any other country girl in those days.  I wanted more from life than that back-breaking farm work.  I had graduated from 8th grade and I somehow sensed that that was all I was going to get from school.  In those days women were expected to get married and take care of family...just as I had been doing since I was old enough to walk.  So there was your father, a lean handsome stepbrother, son of stepfather John, often lazing up in the hayloft, talking about doing big things, seeing the world.  And he spun me a world that freed me from field work and slopping hogs and I fell for it.  So, at the age of 13, your daddy 19, we said our vows before a country preacher, then settled into a shack converted from a chicken coop, on the same road that I walked to school as a child, we set about sharecropping the same fields I had walked in earlier years.  Those dreams your daddy spun dissolved like cotton candy.

Dearel:  Thanks, mom.  I'll give you a little break now.  Let's go have a cup of coffee and you can light up your Pall Mall and relax a spell.

What a nice intimate view and insight into you, Thanks for letting me in!
This is a world seemingly gone forever: hard times suffered with grace and dignity and a willingness to work hard when there was no Government Dole. Seems we were much more Human in those days:(