Getting Weary of NATO 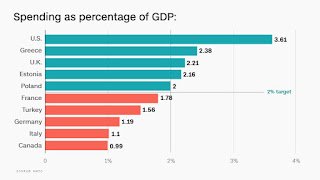 I get utterly weary of hearing Canada and the European members of NATO bragging about their "free health care".  Well of course they have better health care...they ain't paying for their own defense.  Take a look at that chart up above.  The U.S. has been paying for the defense of NATO countries for years, and by the trillions of dollars over the years.  When you got a sucker willing to pay half the freight on your defense you can afford to spend on "goodies".  Secondly, those countries are not forced to feed, medicate, educate, and incarcerate some 30 million illegal Mexicans!

Case in point, the chart above shows that we pay far more ($650 billion dollars) for the world's defense, more than the other 27 members of NATO combined.  And don't use the argument that we make more money.  We don't....we are borrowing from Japan and China to fund our defense needs.  And, if you total the GDP for the other NATO countries they actually exceed the GDP of the United States.

Remember when The Donald hit that fact on the campaign trail?  Hit it hard!  Then, just a few weeks ago, now that he's safely ensconced in the Oval Office, Trump backtracks and says "aw...NATO's okay after all.  Damn, that sad! 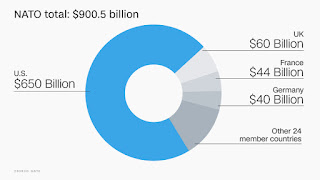 As you can see by the chart above, the UK, France and Germany are by far the biggest moochers....and one of those three absolutely hates Americans.  (Parlez Vous Francais?)  Those three countries have immensely healthy GDP's, but simply won't pay for their own defense.

Now, here's the real cruncher.........almost every one of those NATO countries are not making payments to NATO, even for their tiny mandated contribution!

So, boys and girls, the next time Canada or any of those other NATO countries begin to look down their nose at us, and start bragging about their health care, tell em to grab a gun or a knife, and start defending themselves.   We've had to repeatedly save their asses in our World Wars, and protect their asses for far too long.

Your wrong Scribe. Trump didn't okie dokie NATO Countries. He told them to pay their share. Don't need more "Fake News" than is already being spread.

Hard to tell Trump's position, Frank. Last month he said NATO was no "obsolete" after all and a "bunch of good guys". Then, on this last trip he told them to pay up. This essay was not so much about Trump as the previous administrations over the last three decades. As for Trump, I'll wait for the results to match the rhetoric.

Have to laugh at the left these days: For YEARS, they complained about the US paying the bill for NATO, arguing our "allies" need to do more militarily and financially so we won't have to, saying our continued military presence in Germany (in particular) was a waste of money. Last week, Trump tells Merkel the EXACT SAME THING. What does the left do? Whines about how Trump is "alienating our historic allies".... This guy will be criticized no matter what he does. As for NATO, we have no need to pour billions we into the German economy for the privilege of putting our forces there. The cold war is over - time to revamp the strategy. Great piece.

Thanks, Randy. I too was encouraged when hearing Trump setting aside polite diplomacy and telling those allied suckers to start paying up.