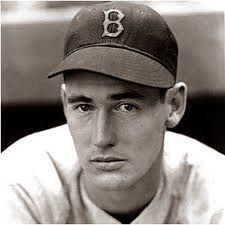 I'm currently through about three quarters of a long 800 page biography of baseball great Ted Williams.  It's a fascinating study about a very complex man...and I think it proves that you can achieve excellence in your chosen field if you're willing to sacrifice everything else in your life.  Ted Williams certainly did; he was a massive failure as a father and, thrice divorced, at marriage too.

But I'll bet you they could go over to that Cryogenic Lab here in Phoenix (Ted's son had him frozen over at the ALCOR facility in town), sew old Ted's head to his body, take him out to home plate at Chase Field and the guy could hit 250....Ted was truly the greatest hitter who ever lived.  In 1941, when "The Kid" was just 23 years old, he hit .406, the last player to do it.  Ted has a lifetime batting average of .344 and, despite missing four and a half of his prime baseball years for service in World War II and again recalled for the Korean War, Williams managed to clout 521 home runs.

Despite my advanced age, I only got to see Ted bat in one game, the 1960 All Star games (back then they played two).  Ted was 41 years old and he still went 1 for 2 (.500 average).  Lest you think old Ted was selected on a sympathy vote, you might want to look at Ted's stats for 1960, his last year.   The guy was almost 42 years old, was developing a little bit of a pot belly, and he still hit .316, clouted 29 home runs and drove in 75 runs on a team that was so bad they rarely had anyone on base for him to drive in.

I have only seen three swings that are as close to perfection as you ever hope to see; Ted Williams, Tony Gwynn, and current Los Angeles first baseman, Adrian Gonzalez.  All three great hitters have one thing in common, they are so balanced at the plate, so dedicated to maintaining a smooth and even swing, that they rarely struck out.  In 7,709 at bats over Williams career he struck out only 709 times, less than one chance in ten.  One year, with nearly 500 at bats, Williams struck out only 24 times in the whole season.

While I still believe Willie Mays was the best all round player in baseball history (Willie hit over 300 for his career,  was the greatest center fielder of all time, had great speed in the field and on the bases, and hit 660 home runs while playing ten years in Candlestick Park where the swirling ocean winds blew homers right back into the park), Ted Williams was the greatest hitter.

For you readers who are non-fans, thanks for indulging me today.  I love baseball; the baseball season have marked the seasons of my own life and I'm enjoying this wonderful read on "Teddy Ballgame".  It's titled "The Kid" and it's written by Ben Bradlee Jr., son of the famed Washington Post editor and a great journalist in his own right.  If it weren't on my Kindle I'd let you borrow it.

And let me end here with my favorite baseball poem by former Yale President and Baseball Commissioner A. Bart Giamatti:

It breaks your heart. It is designed to break your heart. The game begins in the spring, when everything else begins again, and it blossoms in the summer, filling the afternoons and evenings, and then as soon as the chill rains come, it stops and leaves you to face the fall alone. You count on it, rely on it to buffer the passage of time, to keep the memory of sunshine and high skies alive, and then just when the days are all twilight, when you need it most, it stops. – A. Bartlett Giamatti, “The Green Fields of the Mind”
Posted by A Modest Scribler at 2:00 AM

Nice story, you could make a fan of this "non-fan"! and great poem, thanks!

Thanks, Jerry. I kinda think you could never be a fan at this late stage. I believe, if baseball doesn't get into your blood as a child, it just will never grab you.

I've had non baseball people say it is boring. Yet, if you've ever played, you know that there a hundred things going on, not all on the field. Positioning fielders, signals to steal..or not, what pitch to throw, and at what location, and dozens of subtle little moves to maximize chances of success. I'll admit there are a few things in today's baseball that drives me crazy (batters stepping out of the box..which is against the rules but not enforced..pitchers taking too damn long to throw the pitch, etc. But overall, despite all the changes in our lives, today's game is the same one I played as a kid and that's why I love it.

You can loan books from your kindle through your amazon account.

Thanks, Jilly....used to be restricted to family members and certain kind of Kindles...I see I can....so if anyone wishes to borrow my Kindle version of The Kid just send me your name and email address and I'll loan it to you. (good for only 14 days so you'd better be a fast reader cause this book is long!

My Uncle Angelo Sabella owned a Restaurant(Sabelle's) in Marin County and he would take a busload of people on Sundays to Candlestick. When he had extra tickets, my sister and I would get to go so I got to see Willie Mays(as well as McCovey) a lot growing up. It sent a chill through you when he walked from the on deck circle to the plate as the fans would start cheering, slowly at first then build up to a roar. Candlestick was new back then but it was a dump from the beginning. But it was our dump. Many great Giant and 49er memories from there. Unfortunately, there wasn't interleague then so I never got to see Williams play. But some of the greats I did. Gibson, Banks, Aaron etc. Sigh...

Living over in the Central Valley, Frank, I only got to go to Candlestick to see Willie and company play once. That was back when tickets were $2.00 and Willie was one of the highest paid players at $125k a year.

Candlestick where a beer was colder in the 7th inning than when purchased in the 1st.

Yep...it was Mark Twain that said the coldest winter he ever lived through was a summer in San Francisco.

Not only the greatest hitter ever, he was brillant. He remembers every at bat against every pitcher. He can tell you what they threw what he hit and pitch counts. Great homage to a great player. Happens to be my favorite ball player along with....Tony Gwynn. Two great hitters. Thanks Scrib

Yes, Brian...I've heard some of those Ted Williams interviews and was amazed to hear him recall a specific pitch and the pitch count on something that happened forty years ago.