"Where's Idi Amin When You Need Him?" 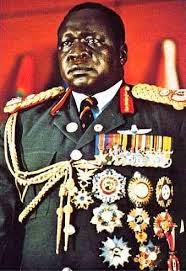 Where the hell is Idi Amin when you need him?  For you youngens, Idi Amin was the dictator of Uganda for about the same two terms that our dictator, Obama will serve.  The guy was amazing...he was an equal opportunity cannibal who literally ate both friend and foe.  He found his political enemies particularly tasty.  If he liked you just a little bit he would just throw you to the crocodiles.  When he was finally overthrown they found human body parts in his freezer as he was unable to finish off his kills before the overthrow.

When I first got to Saudi Arabia in the late 80's old Idi was living over in Jeddah, having embraced Islam at the last moment and given sanctuary by the Saudi King.  I think he died in Saudi, from indigestion after ingesting a Philipino houseboy.

Anyway, I'm kind of nostalgic these days for old African dictators.  And I'm longing for those days when an African nation's name coincided with the one I learned in Geography class.  I mean, really, Idi kept his kill count down to reasonable thousands...he didn't raise whole armies and drive an entire nation across national borders and he didn't go for those mass murders of ten thousand or so.

And Idi had no problems with Christians or Jews and only picked up a Koran when he needed to sit his human barbecue plate on while watching re-runs of Gilligan's Island.  And remember the Israeli's Raid on Entebbe?  Idi had pigged out on "leg of umgawah" that night and slept through the whole thing!

But, again, I just miss our old dictators.  Where's Momar Quaddaffi?  Where's Haile Selassi?  Where's Hosni Mubarrak?  Where's Anwar Sadat?  These guys could be bought and stay bought!  Now it's all mass chaos out there in the Mid East and we're drowning in Arab Springs!  Hell, even Sadaam Hussein is starting to look good!...he kept the camels running on time and he killed fewer people than ISIS is shooting for.  So, I'm missing some of those old time dictators, especially Idi Amin.

Besides, I like Idi's medals.  When I become dictator I'm gonna wear that same uniform.  :)
Posted by A Modest Scribler at 2:00 AM

I am Mariam used every single spell worker on the internet, spent untold amounts of money and discovered they are all fakes...i was the fool though; doing the same thing over and over again and expecting different results. In the end, I decided that I wanted a tarot reading to know what my future held for me; I contacted a woman who lives locally to me and she told me about a man named (priests olalude abija); he does not advertise on the internet, has another job for income, has no set prices, makes no false promises and refuses to help anyone that cannot be helped and even helps for free sometimes, he will give you proof before taking money. He is a wonderful man and he was the only person who actually gave me real results. I really hope he doesn't mind me advertising his contact on the internet but I'm sure any help/ extra work will benefit him.contact him as spirituallighthealing101@live.com He travel sometimes.love marriage,finance, job promotion ,lottery Voodoo,poker voodoo,gambling voodoo,golf Voodoo,Law & Court case Spells,money voodoo,weigh loss voodoo,any sicknesses voodoo,cancer voodoo,Trouble in marriage,it's all he does Hope this helps everyone that is in a desperate situation as I once was; I know how it feels to hold onto something and never have a chance to move on because of the false promises and then to feel trapped in wanting something
more.