My Occasional Descent Into Communisim 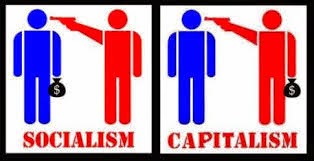 Forgive me for a little navel contemplation this morning. I'm 90% free market capitalist and 10% communist. When I'm feeling a bit communistic I become a bit scornful of the ultra rich who play us for fools even as they fail to understand what kind of life the average working stiff goes through. Somewhere, at this very moment, the 1% are sitting in their million dollar suites, having a champaign brunch with Eggs Benedict while millions wake up hungry, homeless, without hope. Millions more have a job but struggle to pay the bills.
Even the luckiest of us who might have put away a small nest egg and live comfortably still feel guilty at indulging in even a little luxury. We worry if the nest egg will last, and half of century of careful living and hard work make us self conscious of wasting anything or indulging too much. Yet, there are investment bankers in their penthouses in New York, or out on their Long Island or New Jersey estates, living the high life because they are able to clip 1/16th of a penny in profit from millions of investment transactions ever day....and that 1/16th of a penny gives them income of $100,000 a day...for which they have not expended one drop of sweat and where no intellectual talent is required.
Politicians accrue their wealth differently; they trade on insider information about favorable legislation, the retire from politics and get paid $100,000 dollars to spout wisdom for an hour, or they serve on the board of G.E. or Walmart and collect a million bucks a year as a figurehead of corporations who care only for the bottom line and not a scintilla of sympathy for the average working joe.
Billionaires use their money like it's monopoly money; the only meaning their wealth has is determining how they can manipulate its movement in order to accrue even more. The only thing that makes me a capitalist is seeing how the government can waste money like no one else on earth. I think I'd have far more sympathy for imposing higher taxes if the damn government didn't waste it in giving it out to so many frauds who delight in living off the carcass of the productive.
If government should ever buck up, and begin to self audit their massively wasteful programs I'd be the first guy to jump up and say tax that damn investment banker more!...No one should be drinking Champaign and eating Eggs Benedict for brunch as long as someone's is really hurting. Okay, I'm done...my oatmeal is getting cold.
Posted by A Modest Scribler at 9:14 AM

For all their proclamations about wanting to help the poor and needy it has to wait until the champagne is gone. Where is Robin Hood when he/she is needed.

Brian, mine are public libraries and my mailman.

Right, Craig! Where is Robin? It ain't the government...they always have to have a few bureaucracy to do anything!

After four years of retirement(that cut into my liquid spending money bigtime), where I had to watch every dollar I spent, I decided to go back to work. And boy, am I glad I did. Retirement was a bore anyway. I am useful again. I have a world of knowledge gleaned over many years of working. and I'm climbing the latter again. It's great to be cash flush, and can go out for steak whenever I want)my interpretation of being well off) . I(to a much lesser extent) understand the driving force behind the Rich. Does everyone have that available to them? Probably not. There ALWAYS will be Haves and Have nots. Chance, motivation, and just plain lucky doesn't happen to everyone.