Tuesday America Took Out The Trash 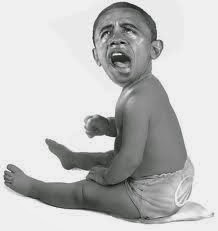 Obama and his legion of yes men sat in the White House Tuesday night and saw the writing on the wall early in the returns.  Trying again to be one of the "big boys", Obama announced that he wants to get together at the White House on Friday.  He'll try again to paint himself as a "uniter", all the while insisting that he'll grant amnesty to illegal Mexican invaders and he'll insist that no one touch his disastrous Obamacare program.

Yes, I enjoyed Tuesday night very much.  Not a single Republican Senate incumbent lost their seat and, though we won't know the results of Alaska until later in the week, and Louisiana on December 6th, Republicans may very well pick up nine seats from the Democrats.  The television coverage was interesting.  While Fox was trotting out both Democrats and Republicans to get their take on the election, CNN had disgraced Black culture thug, and Obama appointee Van Jones and Obama's old press secretary to do damage control.  Both denied the election was not a "wave election" and pointed out the low voter turnout.  What they wouldn't admit is that Barry's minions did not turn out in any significant numbers for a good reason; he ain't done nothing for them.  Black unemployment remains at 30% and Hispanics are beginning to believe Barry can't deliver on his amnesty promise...so they stayed home.  Conversely, Middle Class America came out in greater numbers, and in all age groups while Obama's college kids stayed home in Mom and Dad's basement and pouted, refusing to caucus with Obama who hasn't been able to deliver an economy that will win them jobs.

Back to the TV coverage.  I must admit I kept switching over to MSNBC to see what Rachel and Chris and Big Al were saying about their idol's ass whooping.  Early in the evening Rachel Maddow was rubbing her hands and crowing that Democrats were projected to take a lot of the Governor races.  By midnight Eastern even those dreams were smashed; Liberal Massachusetts elected a Republican governor as did deep blue Maryland and even Illinois, saddled with $100 billion dollars in unfunded union pension liabilities voted in a Republican to see if he could straighten out the mess. Overall, Republican governors actually extended their lead in the governor state count, another message for big spending liberals.

Also thrilling was the massive defeat of the socialist union thugs in Wisconsin as Governor Scott Walker trounced their candidate Mary Burke in a landslide.  The AP reported that the unions in Wisconsin spent hundreds of millions of dollars in Wisconsin alone and now have nothing to show for all those union dues.

It was interesting that it was Iowa's Joni Ernst victory over a closet liberal who put the Republicans over the top.  She won the hearts of Iowans in her very first ad when she said she was a pig farmer and was well schooled in castrating hogs.  Accordingly, her victory castrated Harry Reid and his six years of ruling like a despot in the Senate, refusing to bring House bills to a Senate vote, refusing to allow Republicans to add amendments to Senate bills, and closing off any discussion of Senate legislation.

It was also interesting to see that Bill and Hillary were largely ignored.  Slick Willie spent half his time campaigning in Arkansas and the people of Arkansas responded by electing a Republican governor and a Republican Senator and turned Arkansas red from blue faster than any time in political history.  Hillary visited Democratic campaigns 114 times and did little good either.

So, Tuesday America took out the trash.  They sent a dozen liberals to smashing defeat, extending their already impressive majority in the house, and told Obama he is no longer relevant; that they are no longer enamored by all his "perty words".

Now if the Republicans can avoid screwing the pooch.

They can't possibly do any worse than the Democrats. It sure was cool seeing Ole "Madcow", "Tingle" and "Fake Al" squirm. They, along with every other Democrat completely misread the American People. Now let's see if we can put that Jackass in the White house in his place. I have never been so proud of my Country. Sound familiar?

Craig, the only way they can screw it up is to be too timid. If they didn't read the tea leaves on what America thinks about the economy, illegal immigration, and Obama they will have screwed it up. How about starting impeachment proceedings as soon as he grants amnesty to the invaders.

Yes, Frank. I had a good time too watching the liberal media trying to explain this away.

Great headline.... Noticed how quickly the election has faded from the MSM talking points? It remains to be seen what, if anything, the R's will do with this clear mandate the voters gave them on Tuesday. Should BO press ahead with "executive amnesty" - whatever that is - Congress has several tools to stop it. Primarily. it would be cutting off the funding to any agency Obama directs to implement his amnesty program. But that would take stones that Boehner clearly doesn't have. Like I said, gonna be interesting.

Yep, Randy. The MSM have already formulated reasons on why the Repubs won. The Daily Beast accuses them of running to the left. All of Obama's media siblings, NBC, ABC, CBS, MSNBC are trotting out Obama loyalists who say the victory means nothing, that the overwhelming Republican victory at all levels, federal, state and local, were simply an anomaly. It's the liberal media rallying back to Obama after playing "objective observer" for a few weeks.