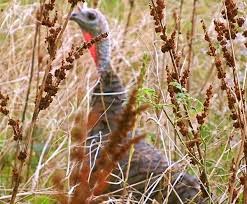 Okay, people...your salivary glands have been activated more than once in recent days, as you contemplate that plump roasted turkey taking center stage on your Thanksgiving table.  Some of you "be prepared" boy scout types already have tom turkey cooling it in your freezer; others, the die-hards, are waiting for Albertsons or Fry's to give you a free turkey with a minimum purchase.  Either way, millions of turkeys will give their lives for you fowl eating heathens in the coming days.

There are always two trains of thought, yours and that of the turkey.  Old Tom has noticed a tragic surge in the culling of the herd lately and he, being one of the smart ones, is hiding in the bushes, watching the more gullible of the species gathered up for a feather plucking and a hot Turkish bath, something his mother warned him about months ago.  "Never get caught", cautioned mom, "these heathens will cut off your head, gouge out your liver and your giblets, tie em around your severed gullet, then they'll stuff all that up your ass and send you on your way for a second Turkish bath on the night before Thanksgiving!"  "Holy crap!".."what kind of beasts these humans must be", thought Tom.

So old Tom he just kept himself hidden in the tallest grasses and watched his brethren led to slaughter, and as the days grew shorter, Tom began to feel a bit safer.  Then, just when he was feeling more secure, a big truck pulled into the turkey ranch.  Tom noticed a big red box painted on the side, but not being able to read, he could not have known the Stouffers folks had arrived to gather up the main course of their Turkey Medallions Dinner and Turkey Tetrazinni meals.  The Stouffers people nearly got old Tom as they had to range farther out to fill their turkey quota.  Miraculously, old Tom escaped again.

By this time the only turkeys left on the ranch were a dozen or so fat chested Toms and hundreds of little chattering turkey chicks.  If turkeys smoked cigars these turkeys would have been puffing away, so self satisfied they were at having escaped the "grand slaughter".  As the weather cooled all these Toms had to do was to stuff themselves with seed corn and squat lazily in the warmth of an autumn sun.

Then, on the Wednesday before Thanksgiving Thursday a long black limousine pulled into the turkey yard.  A rather proper looking fellow got out of the car, and accompanied by a contingent of armed men, walked over Tom's way.  Tom, having stuffed himself so fully in the last few days, was far too fat to even scurry away.  With great ease they threw a net over old Tom and put him in a cage before placing him in the back seat where he faced armed guards on both sides of him.

After a long ride, Tom was taken to a big white house, brought in the back door and into a huge kitchen.  Though with a grand flap of feathers Tom expressed his indignation, he soon found himself manhandled by a lady wearing a pink smock.  And then, indignities upon indignities, Tom was plunged into a sink of luke warm water....."oh no", thought Tom "it's the Turkish bath for me after all".

But, instead, Tom felt gentle hands massaging his huge chest and working some sort of aromatic into his feathers, down his back and a most pleasant chest rub followed.  Then, he was plucked from he sink and was subjected to a device that blew hot dry air over his feathers until they were all dry and fluffy.

They then tied something around his neck and led him by a rope into a rather large room into the house itself.  Dizzied by all of this manhandling, Tom could have sworn that the room was egg shaped rather than the normal four walls.  It was hard to tell because of several forms of artificial light and some sort of whirring devices with glass fronts and all focused on him.  At least two dozen humans filled the room as Tom was lifted up onto a table and held firmly with the neck leash.  Enough slack was given for Tom to herk and jerk his neck around and emitting an occasional "turkey squall" to let them all know he wasn't pleased.

Just then a rather pleasant looking man entered the room, smiling, then moving over to Tom where he took Tom's neck in hand, complimented him on his plumpness, said a few words to those present, then raised his hands in some semblance of grand gesture and uttered the words "Presidential pardon".   The humans then applauded loudly, scaring Tom a bit which always tends to loosen the bowels and old Tom left a steaming pile of turkey poop on an otherwise well polished table.

But with age comes wisdom...so that many years later, old Tom wondered what turkey had given its life so that he might live, what poor bastard was whisked into that big white house in the dead of night, given that final Turkish bath and served up on the Presidential table, so that a silly human tradition of pardoning the star of Thanksgiving dinner could go on...

May your Thanksgiving be a happy one,  dear friends.

I will wish the hussien obama's a double shot of the "steaming pile of turkey poop". I don't think radical muslim's celebrate the holiday though.

I will wish you and yours a very Blessed Holiday. Happy Thanksgiving!!

My 2 daughters are scattered about this country, almost 3,000 miles away. They are doing well and I am thankful for that but there are no decent wage jobs in my community. My wife and I celebrate Thanksgiving by having a fish sandwich at McDonald's and going to a Movie. Actually, we look forward to it, our once a year "night on the town"!
My daughters do come home for Christmas so Tom Turkey is safe until then.
Happy Thanksgiving!

Happy Thanksgiving, Jerry. Unfortunately, I've come down with a stomach virus and the turkey is probably safe for today at least. Have a great day.

get well quickly, my friend!