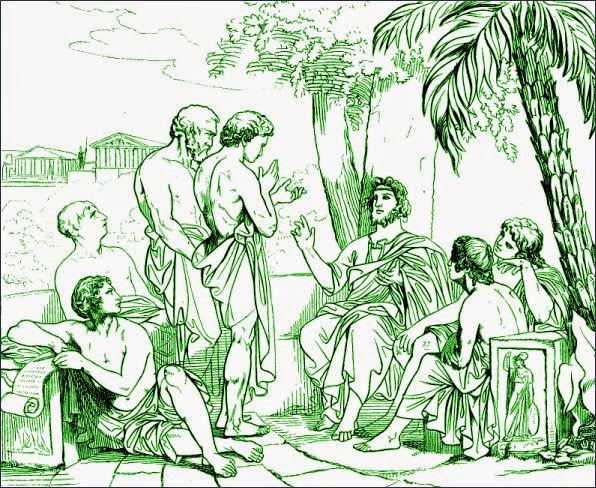 The Sophists were a band of philosophers who plied their trade in the same era as Socrates and Plato.  They served as educators to the wealthy and politically ambitious.  They specialized in teaching their students in the art of rhetoric and proper speech.  But the basis of their philosophy was simply the art of questioning, never burdened with the demand to provide answers to the questions posed.

So Socrates and Plato dissed them mightily.  They criticized the lack of mental discipline that is required for solid and feasible philosophy.  While that is probably true I would think it fun to be able to ask all the questions and let someone else deal with the answers.  Having said all of this, kiddies, let's play a little round of sophistry and see what line of thinking we might follow.

1) Have you ever wondered why politicians seek office?  Are they on a power grab?  Why do people who are vastly wealthy seek political office?  Why don't they just buy a yacht and sail around the world sipping champagne and eating caviar?  Is their quest for political office indicative of something noble in them?  Or is it a sign of poor character?

2) Why do Bill and Hillary, having accumulated $100 million dollars in speaking fees, continue to pursue the world of politics?  Is it a "god" syndrome?  A need to be worshipped?  A need to feed the ego?

3) Given that Barack Obama is out of offices to seek, why is he so hell bent on giving amnesty to 30 million illegal Mexicans?  Is it simply a need to be worshipped by a wider audience?  Or does he really advocate for the Sol Alinkski model of social engineering and is sincerely trying to destroy the old America in order to establish a socialist state?  What is in Obama's DNA that has motivated him to do nothing except campaign for six years?  Why is he so sensitive to criticism?  Do we have another Richard Nixon as President'?...someone who has serious mental illness?

4)  Do liberal Democrats truly believe in their own political philosophy?  When their way clearly doesn't work why do they continue to embrace failure?  What do liberals, deep in their soul, really think of Blacks?  Do they really accept the premise that you can spoil a culture with free government benefits and believe that culture will thrive, and not be spoiled just like you would spoil a child?  Or is there some genetic flaw in the liberal brain that prevents them from applying logic to the life experience?

1) To solve our massive crime problem, with all the expense and harm to innocents, wouldn't it be better just to execute every felony prisoner to make room for a fresh batch?  Then, why couldn't we just declare martial law and round up all the violent thugs and run them all through the execution chamber?  Could we accept that some innocents might be caught up in those mass executions?  What kind of people would we be knowing we have taken some innocent lives as the price to pay for a society free of crime?

2)  What would America look like today if our forefathers had simply shipped those Black slaves back to Africa?  Would we be much farther ahead in our national progress without having to expend $100 trillion dollars in the last fifty years trying to educate and make more human the African race?

3) What about the Muslim problem that the western world has had to live with for the last thousand years?  Would it not be better just to drop a few tactical nukes over Cairo and Baghdad and Syria and Damascus  and Indonesia and selective regions of Africa?  Should we give them a month's notice to afford Islamic moderates time to turn against the savagery of their militant brothers and end the violence or perish along with them?  Would that salve our conscience by issuing a warning?  And again, if we did that, what kind of people would we be?  Would we be any better than those savage Islamic militants?

Sophistry is a game we all play, without even knowing it.  And why not?  It's an easy way to vent frustration.  And, when we are feeling truly ambitious we can even provide the answers to our questions...answers that are more likely to be flawed than not.  I think Socrates and Plato were right; developing a workable philosophy on how we are to guide ourselves, how we are to find answers that are workable and acceptable requires more rigorous thinking.  But sophistry can be a useful tool as well.  It gives us the opportunity to shoot from the hip, throw out some of the most dangerous of ideas...to let us see them in the light of day so that we might know ourselves a bit better.

I hope you have taken this little essay for what it is...kind of a "contemplate our naval" type of thing where we look hard at who we are and who we want to be and learn to think and act accordingly.
Posted by A Modest Scribler at 2:00 AM

There is always a price to pay to get the trains to run on time.

A wonderful theme for today's blog, Jerry. You said it better in one sentence than I did taking up a whole page.

Thanks for the thought provoking Friday blog.Choo Choo.

Where in the heck is my Saturday posting?

No posting on Saturday, Jerry....you readers are getting lazy so I withheld your allowance on Saturday. :)