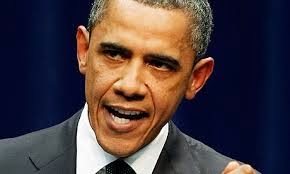 We have all witnessed Barack Hussein Obama's rise to the Presidency.  We've all seen the devastation his Presidency has wrought on our national fabric.  We've seen him break every golden promise about honesty and transparency, a willingness to work with both parties, about bringing us together, about sending the lobbyists scurrying for cover, and about restoring faith in government.

Then, on the first day he took office, he brought in his Chicago Mafia and his Chicago corruption and his dirty Chicago politics...and declared himself Emperor.  He took political donations from his electric battery and solar pals and, in turn, gave them "favored industry status", loaned them hundreds of millions of dollars, then sat back and watched as each declared bankruptcy.

He hired a socialist pal from MIT to write a complicated and convoluted health care plan that taxed the hell out of the working class, but kept that fact buried beneath so mud gobbly-gook that even the Speaker of the House said we'd have to pass it to see what's in it.

He immediate declared war on the Republicans, hosed them down like the St. Valentine's Day massacre and rammed through a $870 billion dollar pork stimulus bill that stimulated nothing.

He then employed his racist Attorney General to strong arm the states into accepting illegal Mexicans in their midst, wire tapped reporters phone lines and intercepted their emails in an effort to quash all criticism of his administration.

And as each new crisis arose, we could be sure that Barack Obama would abandon a leadership role and go out campaigning...even when there was no campaign to win!

He boasts of restoring jobs even as 93 million Americans are unemployed or underemployed.  He brags that his healthcare plan is working even as Americans see their healthcare premiums soar.  He points to a lower unemployment rate but fails to mention that tens of millions have given up looking for jobs and have left the work force.

In winning his elections he has employed voter fraud and resorted to demonizing his opponents; always taking the low road when given a choice.

His foreign policy has been disastrous; six years of "Arab Springs" and he's been AWOL, absent without leave, every time leadership in foreign affairs has been called for.

Yesterday Barack Hussein Obama crossed my own personal "red line" when he declared the United States open to any and all invaders who wish to come and drag us kicking and screaming into 3rd World status.  Obama's declaration that laws are no longer sacred, that they can be declared null and void at his whim, means to me that Obama too is fair game for lawlessness.

So, for the first time in my long life, I'm praying hourly that some lawless hero, with steady hands and a good eye, will blow this socialist bastard's head off, hopefully while he's out on the golf course, fiddling while America burns.  I'll even settle for a less violent but equally deadly onset of bladder cancer that will do Barry in post haste.

God Help America.
Posted by A Modest Scribler at 4:46 AM

And yet as I read the comments on the internets this morning, there are many, many sheeple who still support and defend anything and everything this fraud of a leader does

I wish I could agree with your contention that BO is successful because he lies. I don't. Hal of the country wholeheartedly supports the leftist agenda, to the point where they would gladly surrender their "rights" for the promise of security and safety. Obama is successful because he succinctly articulates the desires of a growing segment of the population.

I think we're both right, Randy..nobody drinks the Kool Aid until the "evangelist" says "drink up".