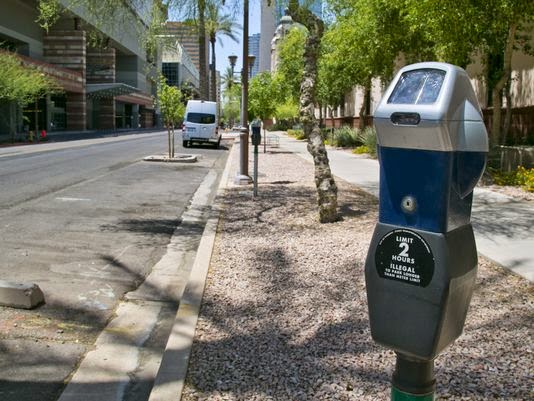 Arizona has our share of liberals, about 20% of the voting populace...the rest are Republican or Independent.  Our liberals tend to congregate in our large city centers; Phoenix downtown and Tucson downtown, as well as our university communities.  As you might expect, their budgets are always in peril.  This year alone Phoenix is running a $38 million dollar deficit.  When that happens the city's politicians begin imposing a tax on food and finding new fees they can hit the taxpayer with.

Well, after a citizen's revolt on food taxes, the pols backed off and looked elsewhere for new revenue (god help them should they ever have to actually cut spending!).  So the city decided to hike parking fees...to as much as $4.00 an hour in some locations!

Well, guess what!  Downtown businesses are seeing a drastic drop in their customer count...and they're not happy!  Business revenue has dropped some 20%, the difference between making a small profit or facing bankruptcy!  Accordingly, the city is now collecting less sales tax, which makes the budget shortfalls even more dire!  The increased parking fees is projected to earn the city an extra $1.4 million per year....but the 20 percent decline in business sales taxes is projected to cost the city $10 million a year!

Well, the Democratic Mayor and the Democratic City Council are wringing their hands and fretting about what to do!  They have yet to realize that their outrageous parking fees are why business is declining and their tax base is declining.  Just about now they are thinking about laying off their meter maids in an effort to cut costs and then folks can ignore the parking meters and park for free without fear of retribution!

So now downtown businesses are hurting, and unemployment is rising as waiters and cooks and drink servers and ticket takers and valets and front desk clerks and, yes, meter maids are laid off who can then apply for unemployment and food stamps and further strain the already strained city and state budget!

All the Mayor and Council need do is get in the car and drive out to the thriving suburbs (where parking is free) to see how to balance their budget....but then that might cost them a little gas money and might imperil their own special sense of business realities!

Sigh.
Posted by A Modest Scribler at 5:31 AM

Is there a gene or something that prevents Liberals from having common sense? Or are they really that stupid? I don't get to interact with them much so I don't quite understand why they don't understand that for every action, there is some sort of reaction. It ain't rocket science for god's sake. Are they all grade school dropouts? Jeez...

@ Frank: Lib government pols begin with the absolute that "SPENDING MUST NEVER BE CUT". The associated corollary is "A REDUCTION IN A PROPOSED RATE OF INCREASE IS A CUT". That explains the slavish devotion to raising "fees" or "assessments"
(never call them taxes - unless targeted exclusively at the mean, evil, greedy rich). CA has been financially destroyed by this mentality, which continues to this day.

Once again the mindless liberals have gone too far. There is no end they will go to to get what they want, and if it harms others... Well, thats too bad.

To see where they get these hairbrained ideas, there is a perfect diagram that explains it all... Just Google the picture called 'The socialist brain of a liberal democrat'.. I'm sure you will enjoy this gem.