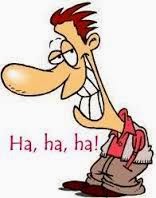 Cue the laugh track, folks.  Remember when those Guatemalans came flooding across the border last summer?  Remember how Obama threw out the welcome mat, fed em, medicated em, sent em off to various resorts and told them to report first thing Monday morning to an Immigration Court?  95% of em couldn't be found on Monday afternoon.

So, last Thursday night Obama announced blanket amnesty to a minimum of 5 million illegal Mexicans, told them they had to register, pay fines, apply for a green card and fess up to where they are making their money and paying taxes on the dough.  Yeah, you got it; cue the laugh track...he's telling two generations of Mexican lawbreakers to get right with all of our various laws.  Now, let's see..what's the chance of that happening...oh, I don't know...how about NONE!

Barry, something of an outlaw himself, is telling folks who execute "hit and runs" like they were a picnic in the park, who routinely stroll down to the nearest Mexican mercado, pay $50 bucks for brilliant forgeries of social security cards and state driver's licenses, get paid tax free under the table, and they're gonna rush right in to an immigration office and do exactly what Obama says?  Ain't happening.

And really, Obama doesn't care.  He was just using all that "law stuff" to placate the 70% of America who somehow don't think it's right that these cheating Mexican bastards are getting rewarded for breaking our nation's immigration laws.

And just as previous amnesties resulted in further invasion, you can bet your sweet asses, dear readers, that Central and South Americans are even now packing their bags for a roof top train ride to the American border.  Play it smart folks and invest in Univision, Sombreros, Mission Tortillas and the refried bean industry.  We officially became third world at 6PM MST last Thursday night.

Oh, and you can cue up the violins too cause your taxes are gonna go sky high trying to support another 40 or 50 million Central and South Americans.  Viva America Norte'!

I'm buying stock in ADT home security, it's a sure thing.

Obama is smarter than that and you know it. It was Not a blanket amnesty but it was a Brilliant Chess maneuver, so close to a "check mate"! and puts the ball squarely at the Republican court where it has been sitting for over a Year and a Half! Passed by the Senate in a Bipartisan Bill 18 months ago and Not allowed on the House floor! Why won't the Republicans deal with this issue? Simply because it will tear the Republican party apart. The Republicans, split between the Nazi half wanting concentration camps and the forced deportation of 12 million people (reminiscent of rounding up the Jews in Nazi Germany) and the other half, the Business and corporations who want to keep these immigrants to keep labor cheap and available. Let's have the debate. It is really so simple. If you don't like the Presidential Directive, as Obama said, "Pass a Bill"! We can have the debate and see what the Republican Party is all about! Why are they afraid?

Jerry, you've been guzzling the Kool Aid in massive quantities. First of all, my drunk on liberal friend, there's not a god damned thing wrong with our current immigration laws so don't be laying that shit on us! Enforce the god-dam laws! We don't need another! It's illegal in the land to hire illegals, it's illegal for them to invade, it's illegal for them to avoid paying taxes on their ill-gotten gains and it's immoral that they game our system. Take your Nazi shit and stuff right up your ass. When you and your ilk begin talking about immigration reform you're really just talking amnesty when it all works itself down to the essential elements.

Investing in ADT is a good idea, Brian. America has lost the will to enforce our immigration laws so it's up to us to look out for ourselves.

That's a brilliant move by Obama. Except the Illegals don't believe him. You think they're going to waltz right into a Government Office and give name, address and workplace to a Liar like Obama? I think they're a bit smarter than that. So, Obama makes brownie points with the legal Hispanic population, and the Illegals stay hidden. Must have real smart Advisers...

Frank, you see it the way I do...those lying immoral, law breaking Mexican bastards are not going to change their ways...even if the Emperor himself commands it. All it is; another free ride for the invaders and it is going to open up the floodgates from Central and South America.

Obama's action.... Accomplished what, exactly? Any newly minted US citizens? Any substantive change in US law? Any status of the illegals altered in an appreciable way? No. No. And No. Everybody's right wing panties are all in a wad over this. I think people should wake up to what Obama did - He played his cards, and his hand was basically three of a kind. Not bad, not a winner, either. And Obama has laid the groundwork for the next conservative President to employ EXACTLY the same tactics, but in a very different direction. Obama can do nothing else vis-a-vie illegals. Congress simply does nothing to alter their status, demanding Juan and Juanita "comply with existing immigration law"... Obama can't do ANYTHING ELSE. R's should stay out of the media, decide what to do to stop BO with the budget power (and do it), and put out bills that lay out their agenda (BO vetoes them? So be it.) .... Or they can try to engage him in the MSM, with Boehner and McConnell as the spokesmen. And Obama will clean their clocks yet again. Half of power is knowing how to use it. R's have been given a tremendous opportunity here, with the public solidly against allowing the law-breaking illegals a pass (Why else is Obama trying to "sell" his EM's to the public?). Be smarter this time, and 2016 is the R's to keep. Blow it and you will get President Hillary....

Don't agree, Randy, that Obama has done no harm. Just watch the surge in invasion numbers over the next few months. Barry keeps updating the "residence requirements" over and over. Soon, anyone that got here in 2014 will be lining up for a green card.

I'm also a bit surprised by your comments. Just a few months ago you said you wouldn't vote the mid terms because no one met your standards. Now you're asking conservatives to sacrifice their principles and refuse to battle Obama's open borders.

I seriously doubt many illegals will sign up for anything... Except WELFARE! I also doubt the illegals actually believe him as they too have heard all the countless LIES he spews out like a fountain. Why should they believe hin now? They're not that gulliable.

America hasn't lost the will to enforce our current laws. Its that the messiah has not and never will ENFORCE them, and has sent his Pit Bull, E. Wittholder to make sure the laws aren't enforced with threats and law suits. Maybe the messiah is punishing the country for removing his inner circle and demoting the now castrated Reid, so he can't rubberstamp his agenda!

I would like to see the Supremes step in and tell Emperor Owebama... YOU CAN'T DO THIS.. Its NOT your job to make laws, and you HAVE to STOP!

And of course, he did play golf while he was here... Thats why he came! On the taxpayers dime...NOT his

Don't forget, the House forwarded as many if not more bills to the Senate for action; they are allin Harry Reid limbo. As in how low can you go?

The fourth estate/fifth column chooses not to discuss this inconvenient truth.