Wiping Away The Chinese Smirk? 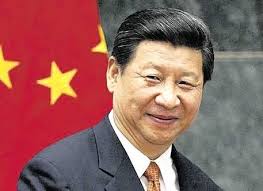 Did anyone catch the PBS Frontline series on the U.S.-China trade war this week? I give the two part series a C+ for journalistic fairness. Although they tried to paint President Trump as a bombastic and inconsistent trade negotiator, they did at least present a wide array of viewpoints regarding the merits of trade tariffs. And they did wander down the crumbling ruins of Dayton, Ohio and Pittsburgh and other manufacturing ghost towns...........American jobs surrendered to the Chinese and elsewhere in Asia.....even as previous American Presidents stood by and let it happen. And they did interview steel and other industrial workers as they sat in obscure coffee shops.....paying for their cup of coffee via a welfare or unemployment check. And, to a man, those poor unemployed stiffs were rooting for President Trump's efforts to return jobs to America.
Perhaps most telling were the astoundingly candid interviews the program conducted in China. Those Chinese businessmen wore smirks on their faces as they declared their rights to their Communist masters manipulation of Chinese currency, their government's total control over national production, national finance, and targeted subsidization of industries, enabling Chinese industry to undercut a free market America on product pricing. Even Chinese technology cybertheft and mandatory American technology transfers as their god-given right.
It seems to me that China is in the "smirk stage". They very much enjoy their $385 billion trade surplus over the U.S. and regard Trump's tariffs as a temporary bump in the road. President Xi is confident that Trump will be defeated next year......then he can resume the perpetual raping of the American economy....just as they've been doing for a decade.
When asked about the U.S. Democratic Party one independent China trade analyst said any of the current Democratic Presidential candidates would be acceptable to China. Said he couldn't think of anything better than the U.S. plunging deeper into national debt as they implement programs that encourage sloth and discourage manufacturing productivity by raising business taxes and laying on more restrictive government regulations.
The Chinese, by their very nature, always think long term......economic dominance as marathon and not a sprint. So they are more than willing to wait out Trump's defeat, faces brightened with self satisfied smirks.
One American economic analyst reminded viewers that economic collapse always precedes the collapse of civilizations. China is counting on our demise. And they may be right. President Trump seems to be the only leader in Washington who is listening to those blue collar unemployed men who dwell in all those American manufacturing ghost towns that now blanket middle America. If President Trump loses this trade war you can count on America becoming a poor satellite of China. Even if you don't like Trump you ought to be rooting for him to win this tariff war. You ought to be praying that he continues to maintain the strength of character that causes him to listen to the lament of that multi-million blue collar army that's hurting so badly. And you ought to be willing to pay more for your Chinese-made Walmart shit, and cut rate clothing, and basketball shoes.
Meantime the Chinese smirk. And await a Democratic victory in 2020.
Sad. Damned Sad.
Posted by A Modest Scribler at 2:00 AM

Guess the Chinese didn't pay attention in 2016. Neither did our Liberal slanted media as they have Trump losing in 2020. Guess we'll just have to show them again who's Boss.REAL Americans understand Trumps importance. You know, Americans that Polls make sure they stay away from. I whole heartily agree. Time to wipe that smirk off their faces.

Consider the possibility that the Chinese are putting on a good face, but are feeling the pressure. They continue to devalue their currency, something they would not ordinarily do. Why? The effect of the tariffs. As much as the left despises Trump, as a businessman he understands trade economics. His predecessor was essentially a life illiterate, with no experience in any aspect of normal adult life. Bush II was a pawn of the RiNO crowd. For the first time since Eisenhower, we have an independent thinker in the WH (spare me the complaints about his personal foiables). Will he prevail with China? 50-50 chance, but at least he's trying. We are so weak as a nation, we cannot endure even the hint of suffering in order to address a bigger problem.

Frank and Randy, both of you may be right. Even American labor bosses, while skewering Trump as much as possible, have had to tread lightly because Trump's standing up to China is more popular than Democrats might wish. Randy, I'm sure some of those smirks are just masks to hide concern. And, like you, I believe Trump's tariffs are more of a concern than China is willing to admit. It really comes down to math. China's $387 billion dollar trade surplus is something they are not willing to give up without a fight.