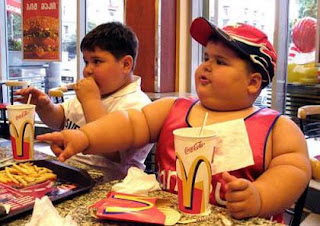 Since there are so many government giveaways these days those who wish to buy your vote with a good ladling of government gravy are finding it difficult to come up with still another solution for a problem that doesn't exist. That is particularly true for the art of feeding the America gullet. Case in point: Since anyone willing to troll a school bus will find childhood hunger is no longer an issue. Kids stepping off that school bus, after a two block ride to school, provide a pretty good look at the nutrition profile of the typical American kid. If we can believe the medical numbers fully 30 percent of those kids will prove to be medically obese. 20 percent of them will be either pre-diabetic or already suffering from adult onset diabetes, attributable to their lack of physical activity and unhealthfull diet. Alas these "it takes a village" kids are problematic for our liberal politicians. They can no longer proclaim childhood hunger as a problem....at least with a straight face. (Or maybe they can.....today's politicians are the grand masters of deceit)
Ah, but I digress. Having solved childhood hunger through overly generous government giveaways, liberals have now re-branded, now calling their newly created cause "Food Uncertainty".
What exactly does that mean? If an American kid downs two Big Macs, a large bucket of fries, and a half gallon of Coca Cola, what does food uncertainty mean? Does it mean there was not enough money left for two apple pies and a chocolate fudge sundae?
By means of soup kitchens, food banks, food stamp cards, and the furnishing of two meals at the local public school how is it that any American kid is either hungry or "food uncertain?"
If you really want to see childhood hunger just take a tour of Asia, or sectors of the Middle East, or the African continent. Those kids aren't "uncertain"....they know damn well when they go to bed hungry.
On a more general note let's look at the profile of American folks who are claiming poverty. With virtually the entire American populace enjoying air conditioning, big screen televisions, smart phones and expensive gaming systems, just how impoverished must we consider them? My generation, and those who preceded me, had none of those luxuries. Were we impoverished? We didn't think so at the time. But then we never considered ourselves victims of a capitalistic society. And you might ask 90 percent of folks elsewhere in the world if they consider folks with those amenities "impoverished".
For a few years of my childhood my family often suffered from the "bare cabinet syndrome". That's what I call "food uncertainty". We did not have access to food banks, soup kitchens, food stamp cards (even welfare recipients were provided a box of commodities.........not a marketable charge card) and free school lunches.
We Americans need to get real about the preponderance of false negatives. Except for the one percent who are homeless there are very few of us who go hungry. As for food uncertainty, well, the only ones I personally know who suffer from that condition are old people trying to pay rent and utilities, pay for their medicines, and still have enough left for food. Childhood hunger? Just follow one of those school buses. Sit patiently behind it and watch how many kids are waddling toward the entrances to their schools.
Posted by A Modest Scribler at 2:00 AM

I'm in San Jose, CA, and I'm a runner. On a billboard I read that 40% of children go hungary. On the side of an empty muni bus, I read 30% of children are obese. So, doing the math, 30% of children are adequately and properly fed? From my obviously unscientific obseru, we have far too many overweight children than those too thin. Food insecurity is like climate change: No real idea what's happening, but it demands action (that will cost tax dollars).

Yes, that food uncertainty was just another solution to a problem that doesn't largely exist. It's still another bid for government gravy that keeps them in office.