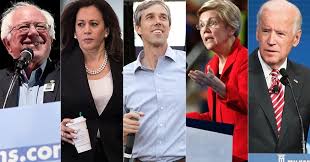 Wow!  Just read a poll that says the current crop of Democratic Presidential candidates might be in trouble with their "third pillar" of electoral support.......Blacks and Hispanics.  Seems Black and Brown people are staring at their electoral choices, mouth agape, saying "what the hell?"

Seems that Democrats of color, who traditionally give 90 percent of their votes to Democrats, are now desperately searching for a candidate that makes sense to them.......that might improve their lot.  And they are not seeing it.

Minorities are scratching their heads over "green new deals", climate change, or government gravy give-aways they know will never happen.  But the biggest breach between today's Democratic candidate crop seems to be the Democratic party's war on religion and active denial of God.  Blacks overwhelmingly still gather on Sunday in their Baptist churches, sing 400 year old hymns, then retreat to the church yard for ribs and sweet potato pie.  Similar sentiments are being registered in the homes of Hispanic families, many of whom the Catholic church is an integral part of their lives.

Frankly I had never thought of this aspect of voter demographics.  I thought all Democrats were willing to worship at the altar of a government agency that dispenses a government check.  Apparently not.

We learn something every day.
Posted by A Modest Scribler at 2:00 AM

Doesn't take a Political Science Degree to see that these 20 or so Morons are doing nothing more than playing "Fantasy I can one up you" games. Obama showed them that you can lie like a dog and get away with it(fundamentally change the Country). Fool me twice? Shame on me.

It's like walking into the most exclusive restaurant in Manhattan and ordering Filet Mignon and champagne for all, never looking at the bill. Add up what just Liz and Bernie want to hand out for free adds up to a cool $60 trillion. And, sadly, if Liz and Bernie taxed the top 1 percent into bankruptcy, it still wouldn't pay for all that free stuff.

There's no way they can do what they say they'll do. None. Glad the whole Country isn't Stupid. Just the ones with a "D" after their name.....

In 2016, the Dems tried an experiment where they jettisoned their older white base in favor of a combination of specific minority groups (students,deviants, certain minorities, etc.). Didn't work, but they obviously haven't given up on the idea that traditional Dem stalwart groups can be replaced with something stronger. The idea this cycle is to appeal to the gimmie crowd. Instead of targeting specific subgroups, simply go after the masses that want free stuff. Interesting approach, and one that just might work. The down side is that if this approach fails, Democrats will be in the political wilderness for several years (much like in 2010 where they took their worst beating in more than 70 years, taking 8 years to retake 1 portion of Congress).

Randy, you might have posed the penultimate question for America to answer. Ten years ago it seemed inconceivable that even Democrats would sacrifice national financial solvency for a seat at the power table. Now there can be no question that they are wiling to do so. From a historical standpoint we have to credit liberals with being relevant after half a century of totally failing ideas.