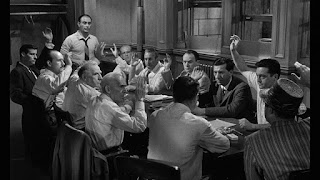 After maybe the twelfth viewing in my lifetime of "12 Angry Men" I'm ready to elevate the film to my top ten favorite films of all time.
All star cast of the best actors of the 20th century.....("more stars than there are in heaven"), tight script, a plot as relevant today as in 1957 when it was made, scenes packed with words that ring so true, and a "film weather" that ought to have won an Oscar for special effects.
Henry Fonda, Jack Klugman, Ed Begley, Robert Webber, Jack Warden, E.G. Marshall and a tortured Lee J. Cobb that should have won an Oscar, Fonda a close second for his placid, thoughtful portrayal of a man with a serene soul. It was the film equivalent of playing Aaron, Mays and Mantle in the same outfield.
The setting is a steamy summer in New York City, a trial that, were it not for Fonda, would have sent a minority kid from the tenements to an early death in the electric chair.
The trial concludes and the jurors retire to the jury room. The closed room is steamy, one small wall fan failing to fend off the rivulets of sweat running down juror faces, then steaming down into shirt and tie and seersucker suit coats. The majority of the jury are ready to pronounce "guilty" on the first roll call......Fonda the lone holdout.
Faced with a full frontal assault from the other jurors, Fonda slowly rises, pleads his doubts as he sifts through the evidence. One by one, he sows seeds of doubt in each piece of evidence. He is met with anger....anger harvested from sundry sources; Begley with his ethnic prejudices, Warden with his bitches at the length of the process, half a dozen others infected with the 50's man's benign indifference, Cobb seething with an internal anger that no one can explain.
At some point during the deliberations the urban gray skies open up and a steady rain begins to fall outside. As rivulets of rain stream down the windows like so many tears the twelve men think, feel, examine their own prejudices and motivations, then retreat for awhile to their "public selves" the tensions ebb and flow....eyes brighten, then dim by turn, frown lines form between brow and along the lifetime of crow's feet below the lash of eye.
As Fonda systematically sows those doubts, pointing out inconsistencies during the trial, a guilty vote turns to "not guilty".
Once biases are confronted, stripped naked for self examination, as evidence is looked at with a fresh eye, as speculation is accepted or rejected, we see that jury room as a microcosm of mid-century civilization, one or another juror wallowing in their biases, others seeking redemption of the soul in new truths.
Cobb is the lone hold out in the end, his inner torture finally revealed with the slap of wallet on table, a single photo slipping out onto the table. And Cobb's inner tortures are finally revealed. And with that revelation he becomes more human as he, in total emotional surrender, casts the final "not guilty" vote.
The final scene has Fonda, stepping out into a New York afternoon, the rain cleansing the air.....a metaphor perhaps for the cleansing that went on in that jury room. Fonda steps lightly down the marble stairs, his "everyman" persona joining the clumps of humans in the streets below, hurrying home for dinner, for a beer or martini at their favorite watering hole, to a liaison with a mistress, or just home to the wife and kids for a meatloaf supper.
The credits roll. And I, viewer, stand up from the easy chair, realize the muscles in my neck are thick with tension from a presentation of the human condition on a 46 inch screen. And feel glad that all manner of human is capable of redemption. And who could ask for more.
Posted by A Modest Scribler at 2:00 AM

Concur. Also really enjoyed "And Justice For All", where an effective (but ethically challenged) attorney is forced to defend a judge that has unfairly treated both him and his clients in the judge's court. John Forsythe is superb as the arrogant judge forced to stand trial.

Whew! Thought I was never gonna get a comment on this one. Yes, there have been so many great courtroom dramas over the years. I've enjoyed the vast majority of them. This particular one was poignant because it brought the justice system down to eye level, that we might see both its merits and imperfections.