Democrats: "I'll Have A Double Order Of Hypocrisy, Please 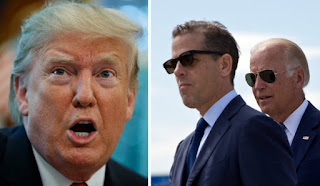 Did President Trump make U.S foreign aid to the Ukraine conditional on digging up dirt on Joe Biden? Maybe we'll know when Trump releases the transcript. Would not be surprised to hear that the President's conversation might have been along those lines. However, the second question should be "is there a legal basis for President Trump's request? Or was it just political?
Let's explore that a bit. Some of you may recall that the questions about Biden and his son, Hunter's integrity was raised long before Trump raised the issue. If one were following the news just a few years ago government watchdogs were questioning why the Ukrainian government would pay Hunter Biden a nice fat salary to sit on a Ukranian gas company's board of directors. When Biden was questioned about it he said he and his son never discuss business so, in his capacity as Vice President, he exerted no improper influence toward proffering foreign aid to The Ukraine. Does anyone buy that, folks? Did Democrats raise a stink about it? The answer to both of those questions shoaled be a resounding "no".
Perhaps any Biden corruption can be answered with Joe and Hunter's visit to Beijing, China in 2013. Vice President Biden was supposedly on an official visit to China and he just asked his son to "tag along". That sounds innocent, right? Except a few short months after the two Bidens returned from China the Chinese government invested $1.5 billion (billion with a B!) in Hunter Biden's investment firm. Coincidence, or corruption? I vote the latter. Did the Democrats investigate, or even raise the matter as an issue? They were silent as church mice.
So, tell me, my Facebook friends. Are you worried that Trump questioned the Ukraine about possible Biden corruption? Or will you join the Democrats in still another foray into getting our President impeached?
Democratic hypocrisy is beyond credible belief, except for their left wing lemmings.
Sad. Damned Sad.
Posted by A Modest Scribler at 4:11 PM