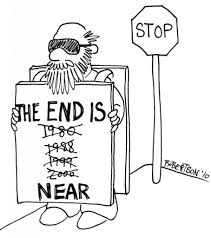 A recent Reuters/Ipsos poll noted that 69 percent of Americans want swift action to combat climate change. In that same poll Americans were asked if they'd be willing to pay an extra $100 dollars a year on their electric bill in support of alternative energy. Only 29 percent said they were willing to shell out that extra hundred bucks.
In the last economic summit held in Davos, Switzerland the world's billionaires convened for caviar and filet mignon, spa treatments and to attend meetings focused on better economic practices. Those hundreds of billionaires politely listened to climate change activists, then politely applauded, before some 317 of the conferees climbed back into their private jets and headed home.
In the 1960's scientists predicted the population explosion would lead to mass world wide starvation by 1990, cause the world could never raise that much food. After that came the "Acid Rain Crisis", then the ozone hole, then "weather weirding" and now global warming. (In the last century weather scientists have predicted both global cooling and global warming more than a dozen times).
All of those armageddon false alarms has not deterred our climate radicals. Of late it has been Democrats and the Hollywood elite who exploit climate fears. Bernie Sanders says we need to kill more babies, lest we be unable to feed them all. No fewer than a dozen Presidential candidates demand immediate action to reduce our carbon footprint, even as they themselves drive off in a parade of black gas-guzzling SUV's, headed to the airport where they climb into their private jets. Just the other day Joe Biden promised to take millions of gasoline vehicles off the roads. The next day he attended a rally sponsored by an oil company. Recently Hollywood elites, Silicon Valley billionaires and politicians flew into a Google Camp on climate change over in Sicily, Italy. 117 of them arrived by private jet, not a single one of them willing to "ride share". And perhaps the biggest hypocrisy comes from Barack and Michelle Obama, who just paid more than $15 million for a Martha's Vineyard estate that Barack swears will be under water within 15 years.
Is climate change man made? We don't as yet know for sure. Is climate changing? Bet your booties........its changed a hundred times over the ages. Can we do anything about global warming and polluting our skies? Damn right we can........as long as it comes from someone else's dime.
Only one thing we know for sure. As long as our cultural elites and our politicians exempt themselves from any responsibility us peasants aren't likely to sign up for the pain and expense.
Put the tab on someone else's bill. Make the other guy pay..........please.
Posted by A Modest Scribler at 2:00 AM

In the 1980's, we were all going to die because of global cooling. The ice packs at the pols would expand, cooling the temperature and resulting in crop failures. Except that didn't happen. In the 1990's we were all going to die from global warming. The uses of CFC's in aerosol cans was destroying the ozone layer near the equator, resulting in raising the temperature to the point of crop failures. Except it didn't happen. In the 2000's, the temperatures fluctuated yearly. Al Gore declared it was to be known as "climate change" (since nobody had a clue what was coming). He tacked on the idea that man was responsible because we were using oil products (despite having the cleanest air ever). This is about control. Look at their solutions: Live in packed apartments (no more single family homes), use public transportation (get rid of personal vehicles), and eliminate meat from your diet. No thanks. I'm not buyin any of it. We have climate record for about 150 years with a planet 6,000 years old. It's asinine to think we are killing the planet based upon that little info.