Buy More Poligrip, Joe, And Hang In Till Super Tuesday 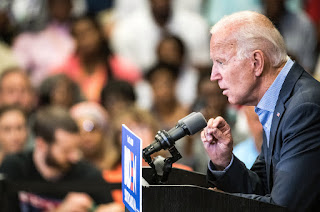 In last week's Democratic debate Joe Biden was a sad sack that's hung around the circus too long.  Nearly incoherent as he referenced record players as a solution for Black urban Ebonics and poor school performance, he was equally clumsy when trying to defend moderation in governance.  At one point you saw old Joe's dentures slipping, then pausing and using his tongue to push his dentures back in place.  Nothing says old like a tube of Poligrip that's past its expiration date.

But, unlike his fellow Democrats, I'm not going to blame Biden's seemingly unending gaffes on his age.  Hell, he stumbled over the English language similarly when much younger, in his two earlier runs for the White House.  Did surgeons extract some essential brain tissue forty years ago when they extracted Biden's brain tumor?  Quite possibly.

Just this weekend I read an editorial in the New York Post, advising Joe to drop out now, to provide room for another moderate Democrat to cross swords with the batshit crazy wing occupied by Kamala and Bernie and Liz.

I beg to disagree.  I want Crazy Joe to die a slow political death, with each succeeding month of gaffes dragging him further down in the polls.  I want Joe to double his Polygrip applications and to try and keep his foot out of his mouth long enough for Super Tuesday.  As "center-lane Democrats" cling to Joe as their only sane alternative against financial armageddon it will be interesting to see what the American political center does to try and defeat President Trump.  The longer the choosing process, the bigger the political whirlwind will be come March.

With California,  Washington State, Oregon and New York delivering victories for Crazy Liz, Biden picking up a couple of midwestern states and scattered selections on the eastern seaboard, the Democrats ought to be in dandy shape before their convention.   And we just might see a floor fight that produces a reproduction of the George McGovern convention in '72.  (And we all know how that turned out, right?)

This all looks pretty sweet to me.  I do not want Biden leading the ticket come next summer.  The choice will then be having to select between two crazy old men who are rapidly reaching the end of their cogent years.  Given a choice I am absolutely sure that moderate Democrats would opt for Joe in lieu of Trump.

Nope.  We need one of the batshit crazy lefties to be leading the ticket next summer.  We need Liz to explain how she pays for free day care, free university tuition, free health care for all, how she'll pay for  giving students a free ride by wiping out their student debt, et al.  Cause the numbers don't add up, even if she taxes Warren Buffett, Jeff Bezos, and Bill Gates and the rest of America's rich into the poor house.  Those centrist Democrats and moderate Independents will run right to Trump as soon as they get a look at Liz Warren's horrid math skills.

So stick around, Joe.  Use Gorilla Glue if you have to.  Keep on fighting, Joe.  Keep on talking about imaginary combat zones, record players, and Indian 7-11 franchise owners.  Then, after the dust has settled you can go back to Delaware and take pot shots at the neighbors with that shotgun.

Oh, and I might add:  if President Trump could just keep his mouth shut next year his chances would be immensely better.
Posted by A Modest Scribler at 2:00 AM

Yes, this whole deal is very much like a circus! Although I just haven't been able to stomach watching much of their debates, I do hear about them and it sounds quite entertaining. To say the least!! What else would be great entertainment, would be to watch Fauxcahontas in a debate against Trump, I must admit.

Carol, I think she would eat Trump alive in a debate.......unless of course he began actively tabulating the costs for all those Liz giveaways. I suspect Liz's biggest flaw is that she consistently sounds like your 10th grade English teacher. Her arrogance is beyond belief and her "I've got a program for that" is wearing then rather quickly. Gonna be an interesting race to follow.

Comes down to a choice between "We learned our lesson in 2016" or "This year we'll do it right". 3 years ago the Dems bet the farm on chucking their historical base in favor of a new coalition of specific subgroups they believed would give them a win. It didn't work. Next year, it is the same situation but will be focused on the candidate, rather than the voters. Do they go "conservative" and stick with Joe, hoping to pull in their older white base, or go with Lying Lizzie and bet on grabbing enough greedy youngsters? Either way, in 2024, the socialist wing will dominate. This is the last chance to see even a ghost of what Democrats used to be. Entertaining, if nothing else.

It is entertaining, Randy. But a sad price to pay. I tend to agree with you for 2024.