De Tocqueville Was Right About "These Americans" 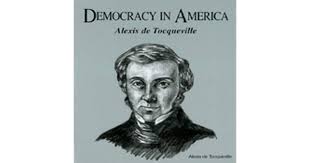 In the 1820's French journalist Alexis De Tocqueville travelled about America..........writing about this "new species of man" who are doing their best to create a nation where individual freedom is valued highly, but cling to a totally new idea.....that, by banding together as community one can create an earthly Eden.
Let's face it; De Tocqueville was a bit of a romantic when it came to this new America. Totally enamored by a Republic then only forty years old, De Tocqueville chose to take a break from a class society Europe, and travel among a people who each believed they were as good as the next guy. Poor Americans felt no envy of wealthy Americans for it was their dream too to someday achieve that same level of prosperity. 'Ol Alexis wrote that, because there was no class envy, Americans were the happiest folks on earth.
De Tocqueville spoke of American town hall meetings, of community barn raising, of helping neighbors get in their crops, of responding to sickness or death in the community with healers and hot meals. He wrote about the American justice system where a citizen would be tried fairly by a jury of his fellow citizens. He wrote about the American's "stiff backbone", fighting for fairness and justice when he thought others were being unjustly treated.
But De Tocqueville found the American belief in both individual initiative and community effort the most impressive. He could not imagine where Americans got the idea that they could be both selfish and generous in the same breath. Americans in De Tocqueville's day would not hesitate to say that a man should make it on his own, yet hurry to that same man's aid when the fates turned bad for him.
I was reminded of that this week as I watched a hundred young people join together to sandbag the homes of the elderly and handicapped in prepping for Hurricane Dorian. I saw Red Cross volunteers in Phoenix set off in aid vans to the eastern seaboard, prepared to feed and medicate storm victims. Just this week in Sun City I read of our CAN (Community Action Network) take a break from cleaning commons grounds, and voluntarily making home repairs to their elderly neighbors to run off and take over Meals On Wheels deliveries when that agency became understaffed.
All of those projects take a back seat to the thousands of everyday heroes who volunteer in our hospitals, our classrooms, who prepare meals in soup kitchens, then scrub pans after. Somehow, despite our many societal failings since De Tocqueville was touring America, that sense of American volunteerism remains as spirited today as it was two hundred years ago. Perhaps even more so.
Personally I'd like to thank the Krogers for putting up and taking down flags on Memorial Day, for Larry's pooper scooper labors, for those here who support suicide prevention efforts, who valiantly champion anti-bullying efforts, who invest their money in St. Jude's Children's Cancer Research Hospital, for all of you who believe in the sanctity of the individual, yet time and again join forces with your fellows to make this a better world.
Perhaps De Tocqueville said it best with this simple quote: "America is great because she is good". May it always be so.
Posted by A Modest Scribler at 2:00 AM

Boy, would he be disappointed if he took that same tour today. Yes, there are a lot of good people still doing good things. But there are WAY too many bad people doing bad things that almost makes the good things seem futile.It's probably too late but if we could move some of the bad over to the good side, we would have a fighting chance a moving the Country back to the Eden it once was perceived to be. Nah, Frank. Everybody thinks they are right and no ones willing to give an inch. Glad I won't be around when the Country falls in the toilet and drowns.....

Frank is right. There has been a profound shift since Trump's predecessor took office. The nation today is more divided than it was during the Vietnam war era. And the divide is more angry, bitter, and aggressive. It's as if the nation wants to fight. The left is ready to jettison capitalism for socialism. The right sees that as wrong. Drugs, sexual deviancy, formerly out of bounds behavior is attempting to be normalized. Those of us that reject it are stereotyped, labeled, and discarded but we still vote. I do not envy the future my children will face. The debt will cripple the nation and NEITHER party cares. We will run out of money and be removed from the world stage as a player.

Guys, I wasn't suggesting for a moment that we don't have some big societal problems. I only said that American probably do more volunteerism than ever. As to our decline, De Tocqueville had some words of warning about that too....a story for another day.