GOP to Texas "We'll Have A Blue Christmas Without You" 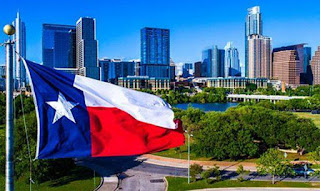 Last weekend I read an opinion piece that suggests Texas will go Democrat Blue within the next four years.  Frightening!  And seemingly unbelievable until one considers that a pothead named Beto nearly beat Ted Cruz a couple of years ago.  Nearly beat one of the strongest conservatives in the U.S. Senate.

Was that Democratic wonk just spreading bullshit?  Apparently not, according to some stuff I dug up online.  Seems that, though a Democrat has not won statewide office in Texas since 1994, the cancer of liberalism has spread from its Austin bastion and is now infusing Dallas and environs, with San Antonio and Houston in its sights.

Apparently one of the factors in Democratic progress has been the influx of "immigrants" from California and elsewhere.  Liberal "immigrants" have been arriving at a 25 percent faster pace that those moderates and conservatives arriving from elsewhere.  If that trend continues you may as well write the political obituary for the GOP.  The Democrats, who now own California, Oregon, Washington state and the northern eastern seaboard lock stock and barrel, would command overwhelming electoral numbers that flyover, conservative America could not possibly overcome.  Add Texas's 38 electoral votes to California's commanding 55, Illinois's 20, New York's 29 and Philadelphia-driven Pennsylvania's 20 and the Dems are over half way to electoral victory.  Hell, the news media could just begin declaring a Democratic victory about two minutes after the polls close.

And don't expect my home state of Arizona to be a Republican lock.  We just elected a Democrat to the Senate for the first time in 30 years.  Arizonans, like citizens from the other 49 are being lured by the free government gravy other states have enjoyed in recent years, even as those generous benefits sink the liberal states toward bankruptcy.

Perhaps, as many of my readers have suggested, the Democrats will field candidates so absurdly left wing that we'll be saved from an overwhelming blue wave in 2020.  Please let that be so.  I want that kid with his finger in the dyke to hang on until they play taps for me in Arlington.

But if Texas drifts any further left we'll certainly hear that melodic "We'll Have A Blue Christmas Without You".

Where to begin... I grew up in Knoxville, Tennessee, as conservative a place as ever existed. I'm in San Jose for two more years, then we move. I'm looking at TX, TN, or AZ. Yet the indicators for all three point left. I have 20 year old twin boys. Talking with one yesterday and he told me "Dad, the world is changing away from what you believe and our view is going to be the way things are." My sons were raised in the church and went to a private Christian school. The one I talked with yesterday has rejected it, all of it. He sees nothing wrong with sodomite marriage, believes drugs should be made legal, supports "doing something" about gun violence, and wonders why I believe these ideas are wrong. This, from a child reared in a very conservative home. My other son has not been corrupted. If my son has been convinced of the legitimacy of leftist ideals despite how I brought him up, it seems inevitable that this nation will trod down the path of socialism. The time frame? No idea. But the certainty of that reality I do not doubt. For 30 years, Bernie Sanders was the laughing stock of the Senate. No longer. I see those of us with staunch conservative beliefs placed in the role of Sanders a generation ago, laughed at and ridiculed, marginalized as an irrelevant minority. As bleak as it sounds, the current generation of voters are willing to throw the opportunity for success away in favor of a guaranteed (yet minimally adequate) outcome as decreed by a monstrous government bureaucracy.

It would be interesting to hear what your son says about what finite number he would allow for illegal immigration. Shall we allow 300 million central and south americans to come in? Does he see any negative consequences from that? Or the drug problem; given that we have relaxed our drug laws to such an extent (and are already seeing the sad consequences) does he think all out legalization of drugs will make us better off? Does he not see that our societal near surrender to morals and principles have already produced a sick society, where the work ethic is quickly dying. Can he look at a pie chart, look at how much interest we are already paying on our national debt, and not be able to correlate how much a greater percentage of government taxes will eat up the funds we might spend on the social programs his Dems love so much? Given your state choices I'd say Texas is probably your best bet, since Arizona is so close to California we quickly absorb their ilk and turn more quickly purple, then red.

I will ask him your questions today.