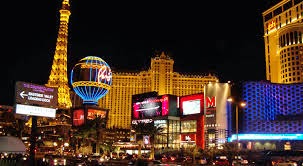 How many of you folks go to Las Vegas?  I haven't been for a decade.  I suppose if you didn't see what Vegas use to be you might not think it's too bad now.  But I'm handicapped by knowing what it was like 45 years ago.
When I first started going to Vegas back in the late sixties you could get a nice room for ten bucks, a three egg breakfast with toast and bacon and hash browns cost you $1.99.  And it didn't take an hour to drive down the two miles of the strip.  My game was Blackjack and most of the casino tables were still dealing with a single deck.  For a decade or so you could still find a dollar minimum game of Blackjack and the best casinos and the staff treated you like a human being and not an ATM dispenser.

Rooms were spotless, the free drinks flowed freely and what happened in Vegas really DID stay in Vegas.  You could walk from casino to casino and not having a 3rd world Mexican shoving a prostitution circular in your face.  Back then Howard Hughes was taking over the town but he didn't bother me as he sat up all night watching old movies that he's ordered up at his Hughes owned TV station.

So, as the years progressed Vegas just kept getting glitzier and cheesier.  It seems that, no matter how fancy their new casinos were, the quality of their clientele just kept getting worse and worse; drug dealing Mexicans, Asian businessmen and women from Southern California, flush with cash from not paying their taxes, congregated more and more in Vegas.  Vegas went international, first from Japanese businessmen, then Saudi's, and now from everywhere.  So the money is so rich the casinos learned they could squeeze more and more from the plethora of suckers.  They first hiked their hotel rooms to $75, then $100, and now you can pay $300 or more a night for the privilege of not sleeping in it.  Buffets went from $2.99 to $5.99 to $19.99 and now you can pay $50 or more for a place at the trough.  And even $300 bucks a night won't protect you from bed bugs which seems to be a regular thing in Vegas hotels these days.  And how about forking over $175 bucks to see Donnie and Marie in one of those Vegas showrooms?  Or a bargain basement $100 bucks to see someone who was big in the 90's.

During the transition from Vegas to Gomorrah my wife and I still used to go there once or twice a year when we lived in San Diego.  We'd battle the 5 miles per hour traffic coming out of Vegas and were always exhausted when we got home on Sunday evening.  I finally just tired of it and quit going.

Now that we live in Arizona my wife goes up a couple of times a year; maybe with her girlfriend, or goes up to join family when they visit Vegas.  For a little while back then, when I had my little RV, I would go and stay at the Circus Circus RV resort.  I found that a big improvement over worrying about bed bugs and dirty carpets and drunks roaming down the hallway at 2AM.  But I still found the casinos cold, remote, and peopled by folks I wouldn't have given the time of day to back home.  So, I quite going.

Don't miss it a bit.  Once a year or so I join my wife and go out to one of the local Indian casinos here in Arizona.  They are leaps and bounds better than Vegas.  They still treat customers well and offer attractive comps for your game play.  And only half of the gaming customers are jerks.

Never been and after reading this I don't think I will.

Brian, first of all, I'm shocked that you've never been to Vegas. And then I'll add, you're money ahead!

I go to Vegas once a year in February. I've owned a Timeshare for about the last 15 years, It's about 8 miles from the strip and I love it that way. I have an Aunt and Uncle(in their 80's) that come out from Michigan and have had various family and friends join me every year. Sort of a mini family reunion. I think your being to hard on Vegas. Yes, prices have gone way up but we don't have to pay them.The Strip is crowded but we don't spend much time there, preferring the off Strip places(Rio, South Point etc). I have nothing bad to say about Vegas. Even the 9-10 hour drive from the Bay Area is enjoyable. This is a vote For Vegas. :)

To each his own, Frank. Re The Rio, my wife and family used to go there for their seafood buffet....until it went over $50 bucks a head. Vegas is just not for me...to many folks with either easy or ill gotten money who move up in their social class in Vegas only...and they save their poorest manners for Lost Wages.

Was over $50, Frank, when the family went there...they must have nudged it down a little bit when folks choked on the price.

Never been much of a gambler, work too hard for my money. Don't care for crowds either.

Seafood buffet may fluctuate with seasons and market as well.

I'd like to go once before my time is up, but I get my fix being so close to the East Coast gambling mecca. Since AC has quieted down over the years, I've actually found it more inviting. Yes the summer is swarmed by the multitude of bennies, it still has some great restaurants at not too scary of prices.

I will say this, the buffet prices are terrible. $40+ for a buffet would be great if top quality products were offered, I usually end up going to the food court.

Never been to Atlantic City, Trevor, but I remember stories about how they loved to gouge Easterners who couldn't fly across the country to Vegas. The Indians have got their revenge...they put a huge damper on AC traffic. I"m not weeping tears for them either.