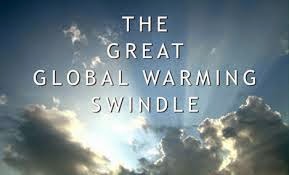 The following is from a scientific journal that questions the validity of human activity's impact on climate change.  What is really scary (and should scare everyone, regardless of your opinion on climate change) is how our monstrous big government is now persecuting those who refuse to fall in line with the government's thinking.  This is scary and you should be concerned.  This is why I can't stand government interference into literally every facet of our lives...and why I'll never trust them.   Footnote:  I read that many, many scientific organizations promote the concept of human caused climate change because literally hundreds of billions of dollars are being funneled to them.  Money talks, folks!  It also corrupts!  There are as many scientists who don't believe as those that do.  As you can see the "non-believers" are being persecuted and threatened!

A little over four hundred years after the Salem witch trials, witch-hunts are still used as a tactic of social persecution and a vehicle to censure those who do not conform to a special interest agenda.   From Salem to McCarthy to today's attacks on so called "climate skeptics," witch-hunts tear the fabric of a free society.

In the past week, Greenpeace initiated an attack on Dr. Willie Soon, a scientist at Harvard-Smithsonian Center for Astrophysics, because of his research on climate change and now several members of Congress have sent letters to 100 organizations that either raise questions and doubts that human activities using fossil energy are causing catastrophic climate change and/or might have provided funds to scientists who are labeled "skeptics."  Letters also have been sent to at least seven universities where some "skeptic" scientists are affiliated.  These letters request a lot of funding information.

The misguided assumption, behind what appears to be a politically orchestrated attack on the credibility of those who question the climate orthodoxy, is that their findings and science-based beliefs are insincere and for sale to the highest bidder.  The problem with this assumption is that it implies that scientists and researchers who rely primarily on public funding for their climate work are not motivated to tailor their research to the beliefs and policy views of their funding sources.

In 1994, Nightline anchor, Ted Koppel ended a program dealing with climate skepticism this way, "... issues have to be debated and settled on scientific grounds, not politics.  There is nothing new about major institutions seeking to influence science to their own ends.  The church did it, ruling families have done it, the communists did it, and so have others, in the name of anti communism.  But it has always been a corrupting influence, and it always will be.

The measure of good science is neither the politics of the scientist nor the people with whom the scientist associates.  It is the immersion of hypotheses into the acid of truth.  That's the hard way to do it, but it's the only way that works."
Posted by A Modest Scribler at 2:00 AM

I watched a bit of it, Craig, and bookmarked it for later viewing. Thanks.

I personally don't have the expertise to make the Global Warming call. It may very well be that some day in the future, the burning of fossil fuels may cause a problem. So I depend on the experts to guide me. What I don't understand is why we can't come to some agreement that it is or isn't a problem today. I think the "chicken little" approach that, oh god, the planet has heated a whole 1 degree in the last 50 years doesn't cut it because temperature history says it happens. But. That doesn't mean it won't be a problem. So. Are we spending billions to protect my Great Grandchildren, or are we being scammed? And how is it that one Political Party believes one way, and the other the complete opposite? That's the scary part. That a political philosophy can get us to believe or not. It's like abortion. I truly believe in the right of the individual to decide. They will have to answer for that decision some day. Can't there ever be just one side to a story that we all agree on? Is that so hard? Damn. Guess it's impossible.

Frank, as to why one political party embraces global warming, well, I already answered your question; follow the money.

I believe in good stewardship of the land, as in don't litter, don't burn your trash and so on. The part that cracks me up, is the ones on the left SCREECHING it's "settled science", that's a phrase they love. I have to chuckle at the sheer arrogance of such a blanket statement, because the earth being flat was once "settled science". The very science of science requires a heavy dose of skepticism, otherwise you're just going on faith and it's become a religion then.

I agree Brian, and it would be the height of irony if two or three volcanos erupted together; then we'd see what mother nature can wrought vs thousands of years of human activity...not even close.

Absolutely, the "super volcano" that's located beneath Yellowstone is large enough that if it were to erupt would put so much ash into the atmosphere that we would likely experience a significant cooling of the planet..