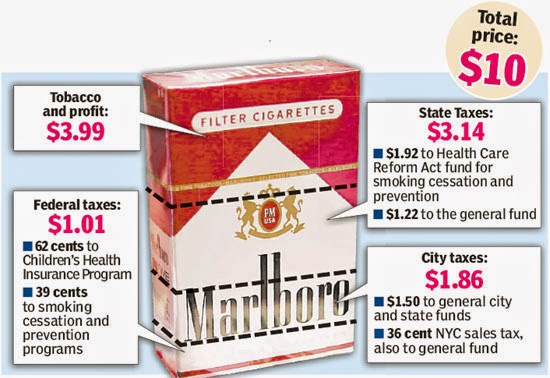 (AP) Dateline 20 June, 2025.  Agents from The U.S. Border Patrol, in coordination with agents from the U.S. Alcohol, Tobacco and Firearms, announced a huge cigarette bust at the port of Nogales, Arizona.  Federal agents reported finding false gas tanks mounted under commercial trucks that were holding more than 10,000 cartons of Marlboro cigarettes.  Authorities report this is the 210th cigarette bust this fiscal year.  The massive inflow of illegal cigarettes harkens back to a time, a decade ago, when marijuana was the product of choice for Mexican smugglers.  However, with the widespread legalization of marijuana in this country, pot is no longer profitable for smugglers.  They have opted instead for cigarettes which are currently taxed at $50 dollars per carton, bringing the price of cigarettes for the American smoker to more than $120 dollars per carton.

If you think the above scenario is unrealistic, consider this.  A carton of cigarettes in Arizona these days goes for $70 bucks.  The tobacco company gets $4 bucks from this, with the remaining costs going toward state, federal and city taxes (and do not include state sales taxes).  In his latest budget President Obama is proposing a 300% increase on the federal tax on cigarettes.  If passed this would bring the cost of cigarettes close to a hundred bucks a carton.   So, when you're talking this kind of dough you have just created a "sweet zone" for cigarette smuggling.

Not too many years ago, when Janet Napolitano was sitting in the Governor's chair, she implemented a huge increase in state taxes on cigarettes.  Amazingly, state revenue from cigarettes dropped 20% in  the year following the increase.  Folks just stopped buying cigarettes at retail stores and began getting their smoke fix from Indian Casinos who are exempt from the tax.  Then, as revealed during a few Nevada-Arizona border stops, they learned that folks were buying ten or twelve cartons up in Vegas and bringing them back to Arizona.

Whenever a government places an undue burden on its citizens, you have created the perfect storm for a black market.  We are already seeing that in places like New York City where Mayor Bloomberg believed he could tax people out of smoking.  Now NYC is ground zero for cigarette smuggling.

While I am not advocating for smokers, having been one and suffered from them, I am advocating for common sense solutions and fair and reasonable and equitable taxes on our citizenry.  And I am issuing a warning to all of you....stand by and allow government to abuse one swath of the citizenry and soon they'll be coming after you as well...government greed knows no limits, people.

So, why aren't we imposing punishing excess taxes on fast food?  Has anyone taken a look at obesity statistics lately?  Why aren't we doubling the tax on alcohol?  The medical costs of alcoholism is astounding!  And, while we're at it, lets impose a tax on texting, and, please let's jack up the price on gasoline...those damn cars are choking us to death.  Let's impose a "user tax" on sex between unmarried partners...those damn latch key kids are costing us a trillion dollars a year to feed, clothe, medicate and educate.

My point here is two fold.  The government is too damn greedy and too damn stupid.  Hike taxes to the point where they are onerous and you create a black market for the goods being taxed.  And, with that black market you create the conditions for violent crime, just as with the drug trade...and with all the higher associated law enforcement costs to deal with it.  Secondly, even if you don't smoke, you should be wary any time the government starts selectively punishing those who are most unable to bear the burden.

"Light em if you've got em"  was the old catch phrase in the military.  Change that to "light em while you've still got the chance cause Big Brother is on the rampage.
Posted by A Modest Scribler at 2:00 AM

There should be a standardized "common sense" test that one must pass before being allowed to run for public office. Maybe one should have to pass the same such test before being able to collect welfare benefits. This whole country is going to hell in a hand-basket. I never thought I'd reach the time when I sounded like my grandparents, ranting about everything.

Jeff, in light of the $19 trillion dollar national debt I'd be happy if our politicians could just master basic math.

Beside the sad truth to your blog is the fact that nicotine addicts will pay anything.

The standard adage is "Tax what you want to discourage, subsidize what you want to encourage." Government does that, but cannot alter human behavior beyond a certain point. Prohibition failed miserably (and gave birth to organized crime), even though alcohol consumption decreased dramatically. Point is, government has assumed to role of moral arbiter in society, but people push back when they decide they don't want to play by rules imposed by politicians.

That was the whole point of my blog, Randy. The outrageous tax does the same as prohibition; creates a black market, minus the huge tax added. That, and the government always reaches the point of greed that they kill the golden goose.