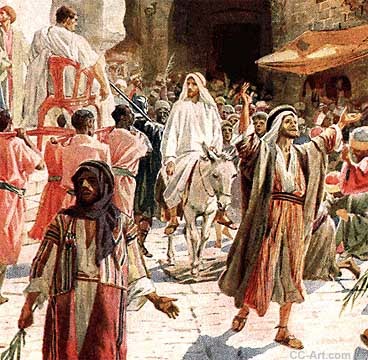 Fresh from feeding the multitudes, and resurrecting Lazarus, the crowds in Jerusalem were in a twitter that their "king" was coming to visit. Fully expecting him to ride in on a horse, as conquering kings had rode before Him, Jesus sent his disciples to fetch a donkey...to send a message that his teachings honored the humble...that he claimed no crown for the earthly world. Never the less, the crowds, fickle, but always frantic to find the next "savior", laid palm fronds in his path and waved them about him to cool him on his journey into the city.

Despite the reverie, Jesus knew his fate before he ever entered the gates...his heart tempered by that knowledge. And, as soon as he began to speak, the religious powers that be, challenged his right to bring a radical new idea; that people are not doomed to an eternity of hell, but can be saved by accepting a doctrine of kindness and forgiveness. Alas, His trials of the week would begin, first in the temple, and then by secular powers. Jesus would denounce the hard cruel messages emanating from the temple, then proclaim to the secular that he had no interest or ambition to be an earthly king.

By Thursday he would host the last supper with His disciples and prepare for His own death. By Friday some of the same people who had rejoiced in his arrival would now loudly root for his death. And he would be crucified for his efforts.

I don't know if he was the son of God, and I don't know if he was resurrected. I only know that the man walked the earth for three decades and talked only of love and kindness and forgiveness. And his words have endured for over 2,000 years because they speak for what we know is moral and right. His words alone make him worthy of remembering Him this week.

Posted by A Modest Scribler at 9:32 AM