"We Deserve A Break Today" 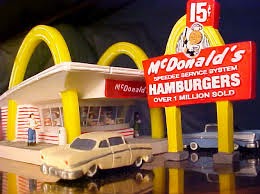 In the last two years McDonald's sales have dropped over ten percent, and they're still bleeding.  So last month they fired the CEO.  So alarmed about plunging sales, McDonald's is trying everything to win customers back.  On Super Bowl weekend they introduced a new line of commercials touting love and world brotherhood.  And they're getting ready to trim their menu cause folks are burning a gallon of gas in the McDonald's Drive-Thru, so slow is their service, reportedly slowest in their industry.  (And, yes, there are statisticians that compute average fast food drive thru wait times.)  All of these corporate efforts are expected to cost McDonald's some $10 billion dollars in the first year alone and they've warned their shareholders of this straight out.

As I've often said before, I can save McDonald's that $10 billion dollars.  Simply go back to basics...quit steaming your beef patties in this clam shell warmers and serve them hot off the grill, just as In N Out Burger does, and just as it was done when founder Ray Kroc was running things.

Secondly, start exerting some corporate control over franchises.  When Ray Kroc was running McDonald's part of the franchise contract stipulated that, if he walked in to a franchise, and found it dirty, or if they were serving cold burgers and fries, he had the right to shut them down and re-sell it to another.  While it only cost $100,000 back then (as opposed to $2.3 million now..and franchisers have to pay 40% of that upfront), the corporation enjoyed huge profits because they collected 2.4% of gross sales.  And, because a single McDonald's franchise, if run well, can generate $2.5 million a year in sales, everyone was happy.

Sadly, today McDonald's has seemed to be satisfied with collecting franchise fees and letting the franchisers do what the hell they want.  So sales are on a continual decline as customers abandon McDonald's in droves, preferring the taste of a good burger at Five Guys or In N Out.

Ray Kroc was no genius...he was just a good businessman willing to give the customers what they wanted.  A former Dixie cup salesman, who then went into hawking milkshake machines, Kroc wandered into the McDonald's brothers hamburger joint down in San Bernardino, California in 1954.  What he found were two guys operating an assembly line burger system and turning out .15 cent burgers, .5 cent coffee, .10 cent fries .20 cent milkshakes and dime cokes...and raking in the dough!
Kroc first partnered with the brothers to open franchises, then bought the brothers out for $2.4 million in the late 50's.

From then on Kroc was on his way.  He was the "burger baron", selling franchises, collecting a percentage of gross sales, and exercising iron clad control over food and service quality.  It took smarter people than Kroc to dream up the Filet of Fish and Big Mac, both of which Kroc opposed, and was proven wrong!  But one thing old Ray always got right; give the customer what he wants...in this case fresh hot burgers off the grill, and the best fries in town...any town.

So, Mickey D's...here's my advice.  Quit trying to coddle the greenies and health food fanatics..they ain't coming!  Lose the wraps and chicken salads, and side salads, and oatmeal, and egg white McMuffins.  Go back to the basics....give us a burger hot off the grill, with steaming hot french fries, keep your damn bathrooms clean, and tell the Al Gore and Nancy Pelosi crowd to go on down the road to Chipotle!

Free advice.....and you save yourself $10 billion dollars in the process....we deserve a break today.
Posted by A Modest Scribler at 2:00 AM

Used to like the Big Mac maybe 20 years ago. Been to Mac D's maybe twice since. Had one right on the corner of where I worked and would drive past it on my way to Burger King(no In and Out close. My favorite). May have something to do with communication. I'd like to order from someone you don't have to translate for. Just a personal pet peeve. Ray Krok's turning in his grave...

I don't eat fast food anymore and haven't for years but this is a shame as this WAS middle America at one time.