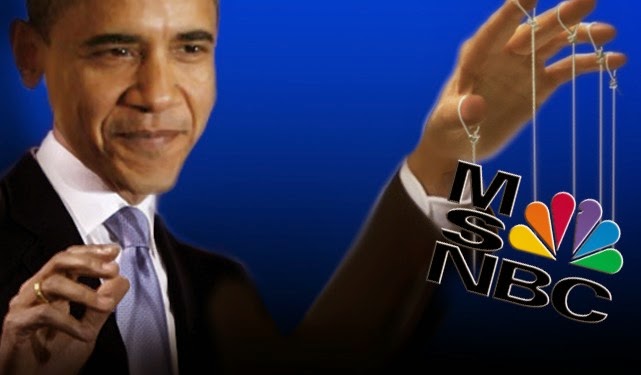 On the first Tuesday in December, 2012, Barack Obama hosted an afternoon soiree at the White House.  His guests?  The entire news staff of MSNBC and The Huffington Post.  Like so many times in his Presidency, Obama believed he was getting a raw deal from the press and was sinking in the polls.  So he called in his "unofficial Pravda", The Huffington crowd and the "tingle down my leg" crowd at MSNBC.  Rachel Maddow was in attendance, as was "tingling Chris Matthews", Ed (Erectile Dysfunction) Schultz, Al Sharpton and the rest of Obama's slobbering adorers.

The meeting was intended to be clandestine but Ed Schultz, so delighted to be in the presence of the anointed one, began tweeting about the meeting as soon as he exited the White House gates.  Obama's Press Secretary was forced to confirm this unscheduled visit at a press conference the next day.

During the meeting Obama opined that he wasn't getting all the admiration he thought he deserved and asked the many liberal foot soldiers to step up their efforts to praise his many achievements.  Apparently it worked!  MSNBC began a fury of 24 hour programming touting the grand accomplishments of "fearless leader", the spittle flying full force.  "Terrible Tara Reid" and Al Sharpton broke out their "oppose Obama, you're racist" strategy and Chris Matthews leg was virtually trembling as he praised Barry to the heavens.

And the MSNBC masters figured that, if half a dozen Obamanites are good, how much better to make it a baker's dozen.  So they brought in Ronan Farrow and Chris Hayes and Melissa Perry to praise Obama 24 hours a day!

Fast forward to February, 2015.  MSNBC had tanked so badly in the ratings they were trailing Fox and CNN and CNN HL and, go forbid, even Telemundo was beating them in the ratings.  Sinatra bastard child Ronan Farrow's ratings were so low that, of 350 million potential viewers, he was drawing less than a hundred thousand committed liberal dead-heads.  Hermaphrodite Chris Hayes, brought on to battle Bill O'Reilly and Anderson Cooper in the prime time slot, was crushed in the ratings.

America had simply had enough of the liberal Pravda.  Even Democrats turned away as MSNBC had evolved into a political "cartoon network" where news was scarce but liberal opinion was abundant.

Finally, last month MSNBC had had enough.  While it's perfectly fine to adore Obama, when it comes down to the almighty advertising dollar, well, money will win out every time.  So NBC Universal fired the MSNBC news director, diluted Melissa Perry's racist invective by integrating her into the Today program,  sent Tara Reid and Ronan Farrow to cover "lost dog" stories and are considering limiting Al Sharpton and Ed (Erectile Disfunction) Schultz to weekends only.

No one knows how Obama is taking this.  It can't make him too happy.  But then he's still got the New York Times and Washington Post and the Huffington Post and the other mainstream media outlets....he just doesn't have his "Pravda" that he delighted in for six plus years.

What surely bothered Obama this week was a nonpartisan media poll that tabbed Fox News as America's most trusted news source.  The Anointed One falters.