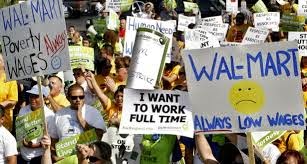 As you all know, in January Walmart announced some pretty impressive pay raises for all their workers.  Well, I waited until this week, for the raises to kick in, to visit my local Walmart store.  First, I needed a few things, and secondly, I wanted to see how great the service was from the better paid employees.

Alas, I had to use two chem-wipes to get all the rug rat residue off the shopping cart, then toss the ice cream wrappers that rested in the bottom of the cart before I could do any serious shopping.  My first encounter was with the door greeter.  He didn't seem any happier so I wheeled right, into the drug and personal care section.  They did not have my preferred mouthwash so I moved over into the small appliance section to pick up a few boxes of my Bunn coffee filters.  None were in stock.  But I felt sure as I moved about the store some happy blue vested employee would ask if I needed help.  As I worked my way through the narrower aisles I found no one who gave a shit about my mouthwash or coffee filters.

Not one to give up, I remembered I needed to replace my ten year old wallet.  So I wheeled over to the wallets, only to find a display that was three quarters empty; the only remaining wallets depicting deer hunters and the face of that reality show bounty hunter....so again I moved on.

Giving up on dry goods, I moved over to the grocery section.  Let me first note that, if I follow the local grocery store ads, I can always beat Walmart grocery prices.  I've never understood why so many folks don't shop around and stop blindly buying their weekly grocery needs in a Walmart store.  But, Walmart does carry my favorite brand of apple pie.  It's called Pippin Apple Pie and the company that makes them and vends them to Walmart make a great pie, their pie factory situated right in their own apple orchards.  The crust is flaky, the pies packed with fresh, not overly sweetened apple pie filling.  They are priced at $3.98 which is at least two bucks cheaper than the junk Mrs. Smith and Sara Lee offer. 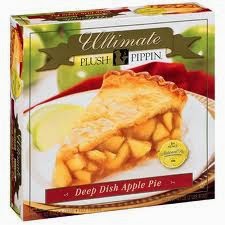 So, when I get to the freezer section I see no Pippin Apple Pies in stock.  I finally "go rogue" and demand from a stocker why no Pippin Apple Pies.  The guy promises to find out and works his way up to the front of the store.  So there I am, waiting in the Hispanic food aisle, my eyes staring in amazement at five gallon cans of Mexican Menudo.....and I'm wondering how one eats five gallons of stomach tripe before the stuff goes bad on you.  Finally, the stocker comes back and it's clear he's focusing on not being distracted from reciting from rote what the manager said about the Pippin Apple Pie drought.  He says "Mr., the manager says Walmart stopped stocking those apple pies because they couldn't negotiate an attractive deal that would have allowed Walmart to make their desired profit margins."  "Huh?, I said.  "How can that be when you're selling Mrs Smith for $6 bucks and Pippin Pies for $3.98?"  "Are you telling me you couldn't find a profit margin with that $2 dollar price differential?"  The stocker looked flummoxed and asked if I wanted him to go back and ask the manager about that.  Well, I let the poor guy off the hook, left my pristine shopping cart next to the menudo display and walked out of Walmart; 0 for 4 on the items I was shopping for.  Enough menudo to feed a gang of Mexican bandits but nothing I needed or wanted.

Well, normally I would have gone to Target.  But since they care so little about my credit card security on the only day I visited the store in 2013 I've boycotted them.  My credit card company had to issue me a new credit card because mine was apparently hacked and rustlers tried to use it.  And just this week Target settled a class action suit for some 70 million Target shoppers for $10 million dollars, nothing more than a "rounding error" on Target's multi-billion dollar balance sheet.   Some one ran the numbers on the settlement and the average Joe could get about .15 cents for his trouble if he filled out a written complaint, in triplicate.  So no Target for me either.

I would have gone to a mom and pop store, if they still had any.  But Target and Walmart have put most of them out of business.

Note:  I will issue all of you a warning; Target has just announced that they too will be giving their employees pay raises, marching in lock step to Walmart's move.  If the service is anything like Walmart you may want to start shopping at Amazon more....I hear that soon you might be having drones deliver your goods.  And, to be frank, at this point I think I'd prefer the company of a drone to the folks that now people Walmart.
Posted by A Modest Scribler at 2:00 AM