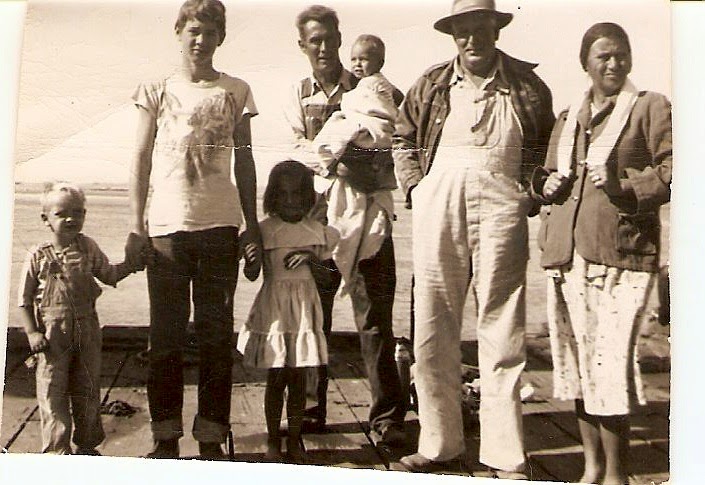 There will always be people who aren't happy until they have assigned you to a "category"....putting you in a little box that best fits THEIR perception of reality.

Recently I personally experienced this as it came from someone I thought was a new found friend. When my own personal views did not coincide with theirs I was immediately assigned to the "ignorant white Okie trash" box. While it was both disappointing and hurtful I refuse to be assigned to their box. In fact, I'm very, very proud of my Okie heritage. From that lineage came folks who lifted me up, who gave me encouragement to achieve what they had never had the chance to have.
From my Okie mother, who valued education above all else, I became a lifelong scholar, always hungry to know more about my world. From that same mother I learned the importance of family, and family unity and loyalty. From my extended Okie family I found admiration and encouragement from them with every endeavor I sought, and pride from them when I achieved my goals. From every sibling, and cousin, and uncle and aunt, I learned to be humble and grateful for the opportunities I received. And from that same family heritage I learned the great American truth: that no matter how lowly our beginnings, no matter how poverty stricken, we can overcome any obstacle if we work hard enough and remember where we came from.
Those Okies of mine picked the cotton that went into work pants and diapers and military uniforms. Those Okies of mine share-cropped, never owning the land, yet grew the cotton and corn and wheat that put food on the American table. Those Okies of mine were part of a close knit family, united by mutual need, who stuck together and birthed their babies and buried their dead, valuing life and honoring the lives of those who passed on. Those Okies were unashamed to praise God for their blessings and turn to him during life's harshest storms. They turned the rich dark soil in the Ozarks and the hard red hardpan fields of Oklahoma and fed themselves as well as many others. They didn't beg for charity from others, or from the government and settled for what their own hands and their own strong backs could produce.
So I might dress up in a fine suit, and attend a Broadway play, or dine in fine restaurants (and know which fork to use), and I might live better than my Okie clan ever did, but I will never forget that what I have came from sailing on their wind beneath my wings.
So, no boxes for me. I refuse to be a prisoner of someone else's idea of how I should think and who I should be. Thank you Okie family...both those living today and those who have passed on, yet leave a legacy of pride that will never die.
Posted by A Modest Scribler at 2:00 AM

Hear Hear.
You are going to become required reading for my children.
Thank you Corky

Nicest compliment I've had for a long while, Corky.

Scrib, your musings today were of particular interest to me because I also am an Okie. When I was a kid I thought being called an Okie was akin to being called a nigger and was ashamed of being so poor. When our family drove through town I would lie down in the back seat so that none of the kids I knew would see me in our old ratty car. Those feelings of inferiority gave me the drive to rise to whatever measure of success I now enjoy. Today, like Merle, "I'm proud to be an Okie" as you are, and pretty much advertise the fact.

Yes, Jerry, thankfully we grew out of that shame. But it was there, alright. Okie and poor were burdens we shared as children.

You don't control where you're from only where you go.