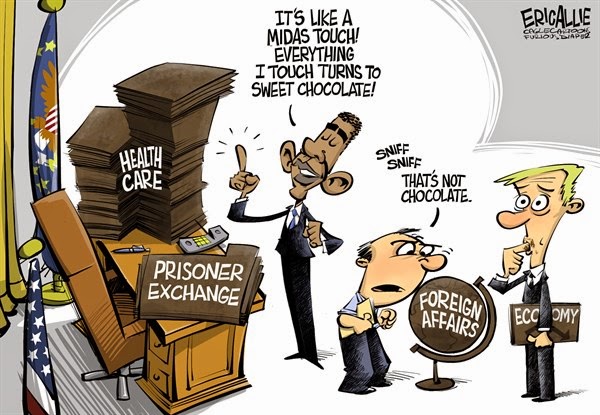 Barack Obama's performance as President has achieved one specific thing; he's become a cartoon figure to most of America...and yes, we can even include Blacks among the folks who don't have the same world view as Barry.

Obama's views are so different than most of us and that, ironically, is how he has managed to last as long as he has.  For six years we've been waiting to see the method to his madness, just as we waited for that $787 billion dollar stimulus bill to produce economic results, just as we waited for Obamacare to make any kind of sense for the working men and women in America, just as we try to understand why he would welcome...no, choose to pamper some 20 million illegal immigrants.

We shake our heads as our President absolutely refuses to use the word Islamic terrorism.  We ponder about his reticence to take a leadership role on the world stage...how he dispatches Angela Merkel to meet with Putin over the Ukraine crisis...or why he failed to show up in Paris to stand with the world as one against terrorism.

And how many times has Barack trotted out some new plan to boost the economy, to increase payroll take home, to boost world trade.  All of his plans die amidst an apathetic Congress, both Republican and Democrat, because they know they won't work.

Well, two conservative columnists came out last week and theorized that Barack Hussein Obama is not the bumbling fool, not the cartoon character we think he is.  Instead, they contend that all of Obama's actions to date are made with the specific intent to destroy the American republic so that it can be re-shaped into the socialist society he mosts covets.  And, when he couldn't do it through Congressional legislation he's done it through Executive Orders and through the employment of terroristic czars.

If that's true we're all in a world of trouble.  We've trouble enough with his six years in office...and now many of us are wondering if we can even survive his last two years.

It's worse than your post indicates. Obama WILL reign for two more years. Congress will do little to stop him, preferring to court the illegals and hoping to avoid being pilloried by the MSM. The world has taken the measure of our President - he is not feared by those that should fear him, not respected by those that should respect him, and not trusted by those that should trust him. Obama also knows that his time is short, and the refusal of Congress to use the power of the purse to stop him dead in his tracks will embolden him to further abuse the Executive Order to "go around" Congress. The next two years will resemble nothing in our nation's history and it will not result in a better nation.

Totally agree, Randy. Fasten your seat belts, it's gonna be a bumpy ride.

Achingly long...wondering if we'll survive it.