Barack and Hillary; Defenders of Islam 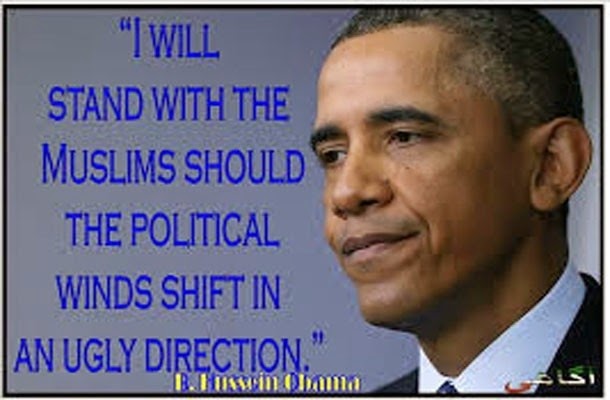 The quote above was taken from Barack Obama's book "Dreams of My Father".  If we were to stretch  as far as we could we might be able to give Barry the benefit of the doubt and write it off as someone who is just naive about the dangers of radical Islam.  However, this past week I came across something that should strike fear in every one of us.  It seems someone had posted something about Hillary and Barack's support for an Islamic group called the Organization for Islamic Cooperation.  Sounds pretty benign, huh?  Well, when I read in the posting that Hillary and Barack want to make it a crime to criticize Muslims I thought it was just some right wing radical making more of something than is there.

So I did a little research on this Organization for Islamic Cooperation.  Seems the group is real, is funded largely by oil rich Saudi Arabia and has membership representing some of the more radical elements of Islam.  AND...Hillary and Barack are four square behind this group.  As a matter of fact, Hillary was dispatched to Istanbul, Turkey to attend an OIC conference and pledged the Obama Administration's support for enacting universal laws making it a crime to criticize a Muslim.

Further, the OIC says that American media are largely responsible for giving them a bad rap and urged Obama to use his influence to quash news reports that might make Muslims look bad.  They would like, wherever possible, for world governments to introduce legislation that would curb media reporting that portrays Muslims as violent and war-like.  The OIC also proposes that slander laws be expanded so that individual citizens can be sued should they speak critically of the Muslim culture.

In researching this organization I came across an Op-Ed in the LA Times by Jonathon Turley, a former Supreme Court staffer and widely recognized expert on Constitutional law.  Turley says Obama and Clinton's aiding and abetting these folks at the OIC puts the free speech liberties of Amreican citizens at risk and this administration needs to be taken to task for it.

I can only surmise that Obama is holding off on issuing an Executive Order on this because of the barbarity currently occurring in the Middle East.  But I would not put it past him to come out with an EO when the storm dies down, of proscribing your prosecution if you dare criticize a Muslim.

Who knows?  Maybe you too will not be able to utter the phrase "Islamic Terrorist!"

For a moment I thought today was April 1st. When did everyone forget the simple wisdom of "Sticks and stones may break my bones but words will never hurt me"?What about a law for those of us that are insulted by the constant ass kissing done by the libtards? Almost makes a person want to throw insults before we are silenced.Gonna be a lot of people in insulters' prison. Happy Monday

Sadly, not April Fools Day, Craig. I couldn't believe this when I first read it either. I'm gonna have to be more vigilant.

O'reilly, must not be doing his home work or he would be all over this.

Jerry, here's just one of Jonathon Turley's op-eds on this. He's been warning of it for four years.

Forgot to add, criticizing Muslims is already against the law in France and several other European countries...didn't help them much, did it.

This is amazing, when you read about these kinds of things you shake your head and laugh. Then you realize it's true and it makes you wonder WTF. It's amazing these libturds pander to everyone but the actual citizens they are suppose to represent. Stock up on your ammo folks.

The GOP needs to pull their collective heads out of the ASSES (and each others) and figure out how to defeat this Turd in 2016. Theres no hope for this once great Country.

I agree, Brian...but then again there are many things Barry has pulled that are beyond belief.