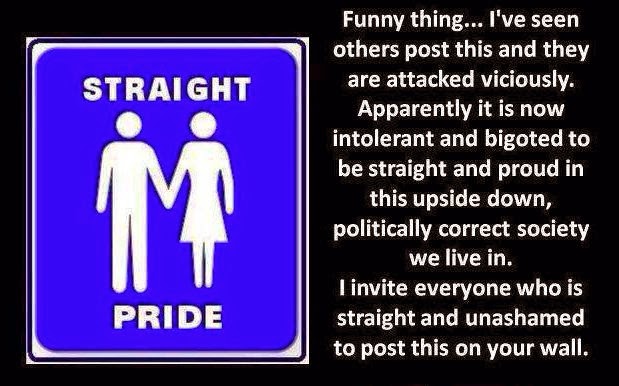 Well, the gay community is up in arms again, this time they are absolutely furious over a growing "straight pride" movement blossoming across the nation.  And, alas, gays don't know who to punch in the nose over this one.  Usually gays can point to conservatives to blame, or people of faith....but the straight pride movement seems to growing in popularity across every economic class, social class, and political class.

Gays profess that the "straight pride" movement is simply another effort to demean the gay community.  Not satisfied with equality, gays are now shooting for "protected and pampered class" and no other group has the right to share that elevated status.

For the most part, gays are winning this battle...at least in the courts and with our government masters.  Just recently a community up in Canada decided to have a "gay pride" day.  When a group of "straights" demanded to have a "straight pride" day the city council went along with it, setting the two community celebrations some three months apart in order to properly recognize each group.  However, the gay group decided that, if community leaders chose to allow a "straight pride" day, then they refused to participate in the "gay pride" day because "if everyone is special, then no one is special."

And at a high school up in Michigan a group of gay high school students decided that they would mark out a special place on campus, marked off in pink ribbon, where gays could go and not feel persecuted, and where "straights" would not be allowed to enter.  One "straight" student felt offended by this and began wearing a sweatshirt to school with the words "straight pride" printed on the front.  When the gays complained the school principle order the straight student to remove the sweatshirt and ordered him not to wear it on campus ever again.  The dispute ended up in court, whereby the judge reversed the principal's decision while stating that these kinds of disputes should never tie up the business of the courts.

Now the gays are battling Face Book because the "straight pride"movement has established a Face Book page which celebrates all things "straight".  No word yet if that too will end up in the courts but that seems likely as well.

It's really sad that our government has time to coddle yet another "pampered class" of people who equate alternative sexual lifestyles with the civil rights movement.  It's even sadder when gays crusade to suppress those who may very well be in support of their right to choose their life path, but absolutely refuse to accord straights with that same freedom of choice.

Funny how a group striving for their rights is quick to cry foul when someone else tries to celebrate their own views. Scary to see how the company has evolved from "freedom for all" to "freedom for special interest groups."

Have a great Valentine's Day, take the wife somewhere nice!

Trevor, the special interest groups have replaced royalty as the "new elite" who will brook no argument from those who don't agree with them.