How Many Strikes Are ILU allowed? 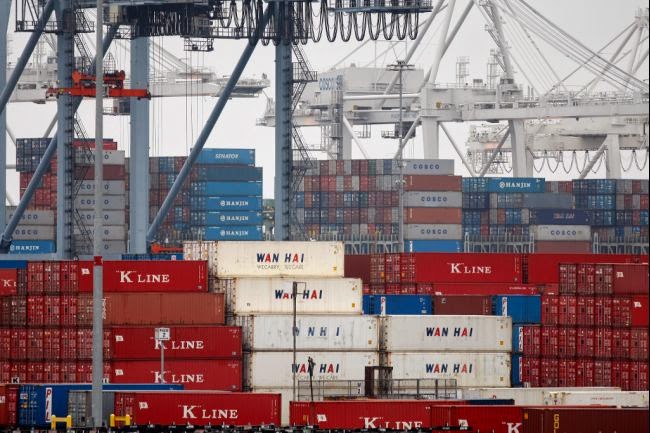 Like most of you, I've been reading about the strike by the International Longshoreman's Union (ILU) over in Los Angeles.  And, like most folks, I know that the ILU in all of the American ports strike about as often as you and I change our underwear.  What I didn't know was what this particular strike was all about.

Well, today I was listening to NPR's Dianne Rehm show and she had a panel of "experts" on to explain what the problems are.  In addition to a logistics expert she hosted an economics professor and one of ILU's labor leaders.   Suffice it to say, I learned a lot.

How many of you knew that the average ILU worker makes an average of $147,000 dollars a year?  And how many of you thought this was about money?  It's not; its about management insisting on having an arbiter on site to monitor the dock workers' inevitable slowdown each week.  Management last spring gave the dock workers another huge pay raise and they expect a fair day's work for that $147k a year...and the workers don't like having someone looking over their shoulder.
One of the other ILU bargaining points is they want to work a 35 hour week but get paid for a 40 hour week and management thinks their $120 bucks an hour is worthy of a full week's work.
Finally, because of the plethora of worker strikes over the years, China and Europe are now pursuing other means to get goods in and out of America.  They are right now pursuing three Mexican deep water ports that will process the goods and bring them by rail into the United States.  And the ILU is crying foul!  They want management assurances that, if Mexico become the point of entry for goods flowing in and out of America, that management will pay them anyway...even if there's no business!  Nice, huh?

Oh, and about the ILU healthcare plan?  The labor rep today said it's one of Obama's "Cadillac Plan" that begins getting taxed as income in 2019, and the ILU is not happy about that at all.  No co-pays, no premiums and the sky's the limit on whatever they need done....

I also learned today that the current strike has cost the U.S.  a 12% decline in GDP, that many small business had to close because they couldn't get their goods brought in, that outgoing produce is landing in Japan with 5 days of shelf life so Japan is canceling food and produce contracts with American suppliers.

I also learned that Singapore and Hong Kong has these state of the art automated systems that require a minimum of human labor and save millions.  Why have they not been built here?  Well the labor rep on Dianne's show today said the ILU will not permit it...they say when the first rail of an automated system is installed they'll walk off the job and cripple the American economy for years!

The ILU remains one of the last of the American industries where unions have held the power to destroy, and they are doing a damn fine job; in Baltimore and New York and New Orleans and in Los Angeles.

It seems to me that the unions are killing themselves and we'll stand over their grave and spit.

Unions served a great purpose at one time, now they are just greedy overpaid babies.maybe all obummers illegals could unload a few ships.

The trucking industry unions have kowtowed to the trucking companies and things are going the opposite direction. Less pay, less benefits. It will happen to the ILU too. There's always a way around a problem and these Goons will wonder what happened. They can delay the inevitable, but not stop it. It's amazing how people in such high places(our Government?) can be so stupid. All it takes is a little common sense. I guess that's a commodity in short supply.

Yes, Frank. Bush implemented Taft Hartley to end the last strike...Obama never will...he's got his head up several asses, one of them the unions.

On top of the $147,000 average pay, other benefits include an annual $35,000 health package each and an $88,000 a year retirement. On Feb 4th, the union turned down a 14 percent raise. I hope Frank is right. No one union should have the power to negatively effect the US economy.

I'll head out and unload ships for half that. Call me!

Those numbers are staggering, Jerry. They'll kill the golden goose, though. I agree, no one should have that kind of power...and they wouldn't if Obama would implement Taft Hartley and end the strike.

Brian, a lot of folks would take half of that pay and benefit package.