How The Dems Avoid Mistake Ownership By Re-Writing History 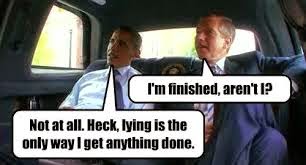 Every liberal newspaper and every Democratic politician are back to re-writing history in trying to explain away liberal darling Brian William's pathological lying problem.  In the past few days literally every liberal publication has explained William's lying as far more acceptable than the lying the Bush administration did when trying to justify the invasion of Iraq.

As anyone with the ability to read knows Democrats have re-written history time and again with regard to the Iraq war.  From 2006 to 2010 one congressional inquiry after another have tackled the events that led up to the Iraqi invasion.  Not a single piece of evidence has ever been uncovered to indicate Bush and his staff knew any more or any less  than the congressional intelligence committees.  Bush, and every member on that inelligence committees believed that Iraq had chemical weapons as well as the elementary beginnings of a nuclear weapon program.  One can "U-Tube" the hell out of the subject and find Hillary Clinton and Bill Clinton and any number of Democrats making speeches about the dangers of Sadaam Hussein's chemical weapons program.  And, when it came to the Congressional votes for the invasion, the vote was bi-partisan in favor....including a "yes" vote from your next President, Hillary Clinton.

But, somehow, Democrats have been successful in disowning their past votes.  They even concoct grand yarns about how Bush and his national security staff knew there were no chemical weapons in Iraq and chose to lie about it in order to win approval for the invasion.

As anyone who reads this blog regularly knows, I was against the Iraqi invasion; I did not believe in efforts to democratize Muslim nations...and I was right on that account.

But the Democrats hypocrisy on this issue is astounding.  And their ability to convince their liberal ilk that they were against the Iraqi invasion from the beginning is even more impressive.  Thus, some 13 years later the Democrats have once again succeeded in diverting responsibility for their own vote to those dastardly Republicans...

So, here they are folks....trying to excuse the horrid lying of one of their favorite media icons...by blaming it all on Bush.  Poor guy...too bad that he wasn't raised to blame others...being "the decider" is sometimes more admirable than those who are never responsible for anything.

Sadly most people in this country suffer from "Cranial Sphincteritus"

Most of me couldn't care less if some media darling lied through his a$$ about anything - who believes anything the MSM says anymore (evidently, not many watch their version of "news" anymore, according to the viewership numbers)? However, a small part of me finds it downright criminal that the lack of credibility for supposedly "objective newsmen" is so easily dismissed when credibility is found to be absent. Character matters - and so does a lack of it. So, I will continue to call the liars, immoral gutter rats, and corrupt parasites EXACTLY what they are - and enjoy the characterizations of "intolerant", "judgmental", and "racist" as a badge of pride. You see, I don't care about what the excusers think - they are the problem.