When "White Privilege" Is Okay 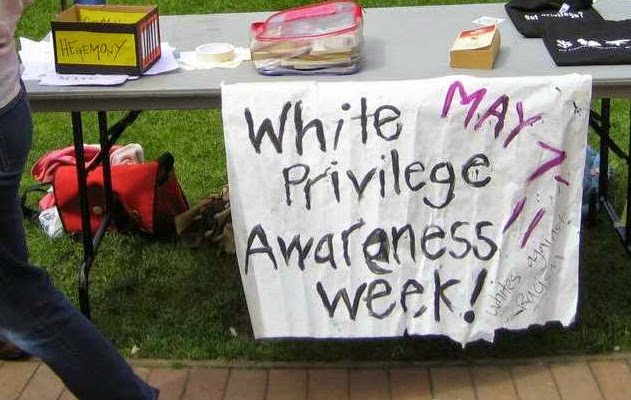 Who knew this "White Privilege" rally cry pre-dates the Michael Brown experience?  I was just reading a story about some rather indignant Blacks down in Baton Rouge, Louisiana who felt Whites weren't feeling guilty enough....especially when it came to forking out higher and higher property taxes to rebuild schools that Blacks simply loved to destroy as soon as new construction was complete.  So the Blacks in urban Baton Rouge began holding White Privilege rallies in an attempt to raise awareness of just how guilty Whites should feel.

Well, apparently the campaign didn't work!  Whites in the southern part of Baton Rouge kept looking at their property bills and saw higher and higher increases in the costs to maintain their community; higher police costs, higher fire district costs, higher school costs, all attributable to the higher crime rates in predominantly Black neighborhoods.  Accordingly, the high crime rates, and the failure to properly maintain both commercial and residential properties led to an erosion of the tax base, causing the predominately White neighborhoods to bear a larger share of city wide property taxes.

So, exercising their "White Privilege" the Whites have decided to secede from Baton Rouge and rebrand their municipality as St. George.  Whites, outnumbered by Blacks in Baton Rouge, decided they'd had enough of bearing two thirds of the taxes, yet having minority voting status when it came time to decide how their taxes would be spent...or wasted!

Well, as expected, Blacks in Baton Rouge are up in arms!  Pleading their case at public hearings on the issue, Blacks are saying that Whites have an obligation to support Black neighborhoods because...well, just because they ought to have lots of White Guilt!

The proposed 70% White residents of the new "St. George" counter that Baton Rouge Blacks "seem to feel we are evil and racist" except when it comes to footing the bill...then it's okay to be White".

All of a sudden the "White Guilt" rallies have stopped dead in their tracks in Baton Rouge.  Blacks are now saying the Whites aren't so bad after all and "can't we just all get along?"

Some lessons must be learned the hard way, I guess.
Posted by A Modest Scribler at 4:21 AM

Ok Scrib, I'll write something. I don't feel guilty or any "white Privilege". What I feel is the need for others to get an education, work hard and have goals. This is what I did as I grew up. My parents did not focus on my education nor did they talk to me about my future(they assumed I was passing). My Dad was a hard working fool, he worked at Libby's for 47 years, my mother stayed at home baby sitting others kids. We weren't poor but we didn't have much either.

I went to school and did ok, didn't put a lot of effort into school and barely passed. After school I worked different jobs until I found something I like and made decent money. I went back to school when I was 33. I decided to change my career at 36 after an incident with my neighbor.

I now have my College degree and a job that I truly enjoy, although frustrating at times. I decided I wanted a better life. I worked for it, nobody handed it to me. That's the problem with people, they want someone to give them everything. They don't want to work for anything.

Blacks in the lower socioeconomic
have created a standard in which they live. They have multiple generations on welfare. They prey on each other and anyone who crosses their paths. When you go there for calls of service they are uncooperative, remmber they called for your help. They complain about how everyone else are racist when in actuality they are more racist then all other race.

I'm not talking aboout all blacks, but a large proportion of them are. They prove it every day. The crime stats, how they vote, BET, ACLU, NAACP, black Colleges and on and on.

Could you imagine the outcry if whites had these acronyms. Now I know there are others who are going to say "we" white do have them because America is ran by whites. But we don't have colleges for blacks, or WET tv, or any other acronym which is specifically for whites.

This is getting old and "played out". Get an education, get up have some self pride and get a job. Life is not easy, but you get out what you put in.

Thanks for your comments, Brian. Your story is America's story...or at least it used to be.

And I agree that Black "victimization" is well played out. More and more folks are catching on to it...albeit slowly.