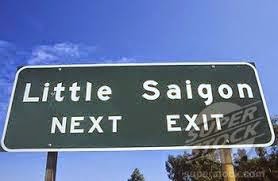 Before 2014 becomes completely obscured in my rear view mirror, I need to take a moment and bid a fond farewell to our dear friend,  Mrs. Dinh (pronounced Zinn).  Mrs. Dinh was a Vietnamese refugee who came here with ready-made family in 1975.   As in so many refugee experiences, the story is complicated.  Our friend came to America with Mr. Dinh, a security analyst employed by the U.S. government.  Upon the fall of Saigon, Mr. Dinh was approved for immediate immigration because he would have surely been tortured in an effort to extract security information, then summarily executed.

Mr. Dinh was a widower and "Mrs Dinh" unmarried.  When it came time to leave Vietnam some sort of informal arrangements were made that Mr. Dinh and "Mrs. Dinh" would form a partnership and bring along four of Mr. Dinh's nieces with them to the states.  After their arrival the two newly formed "parents" got married while in a refugee camp.  Then, they formally adopted those four little girls.

When released from the refugee camp the Dinh family showed up in Lompoc, California.  We just happened to be there because I was en route to a year's overseas assignment in Korea and my family had plans to stay in Lompoc during my absence.  Well, my wife regularly attended mass at the local Catholic church, herding our three kids along with her.  Apparently, the church was involved with helping boat people get settled in America and the Dinhs attended some sort of church dinner that my wife also attended.  Back in those days it didn't take much for Vietnamese people to openly embrace their countrymen; doing so was like revisiting a bit of home.  And, though the Dinhs were Bhuddists they had no problem mixing it up with a Vietnamese Catholic and her brood.

And so, the friendship began.  Our children played together, the two families began sharing meals and learned to rely on one another, the Dinhs being new to America and my wife needing support while husband was a few thousand miles away for a year.

Both families were living pretty modestly; the young airman's family and the refugee's family.  Mr. Dinh, owner of advanced degrees in Vietnam, found no work to meet his educational background.  So he got a part time job with the city of Lompoc, raking leaves in the city park.  How they fed six people on that meager salary I will never know...but they did!

After I returned from Korea my family and I were off for the next assignment in Hawaii.  And the Dinhs moved along to Santa Ana, California, "Little Saigon", the highest concentration of Vietnamese in the United States.  Mr. Dinh got a job as a custodian with the Orange County Sheriff's office.  In time he was promoted and ended up spending a career as a correction's officer there.  The Dinhs bought a modest little house in the older part of town and Mrs. Dinh spent her time as housewife and mom to those little girls.  Despite speaking only broken English the Dinhs knew the word "Education" and they piped that word into those little girls' heads for all of their school years.  And it worked.  All the girls were straight A students and managed to capture whatever academic awards were available to them.  And when they reached their teens everyone of those girls worked the counter at the local McDonalds.  Then on to college where they would again shine.  All were awarded professional degrees and went into professional fields upon graduation.  One of the girls had a taste for journalism and ended up broadcasting the news on the local television station.

By the time the girls were graduated and settled into careers the Dinhs were getting a bit long in the tooth.  Mr. Dinh worked until mandatory retirement age and Mrs. Dinh spent her "leisure years" growing fruits and vegetables out in the back yard.  When not engaged in backyard "farming", Mrs. Dinh loved hitting the thrift shops.  Accustomed to outfitting four girls with thrift shop clothes, she began buying old clothes, then sending them back to family in Vietnam.  On one trip to the thrift shop a few years ago Mrs. Dinh was accosted by a young Mexican man, intent on stealing her purse.  Although almost 70 at the time, Mrs. Dinh was having none of it.  When the thief began tugging at her purse and saying "give me your money", Mrs. Dinh threw the lad down, sat on him and began pointing a finger in his face and saying "no, YOU give me YOUR money!"  I still laugh when I remember that story.

Later, when Vietnam was again opened to travel, the Dinhs would gather half a score of suitcases, pay the extra luggage fees and take back those used clothes while visiting family.

Through all of these years we visited the Dinhs quite often, the wife far more frequently while we lived in San Diego.  She would often go up and spend the night with the oldsters, cook and clean a bit for them, then return home.  Even here in Arizona she made regular visits to Santa Ana, for food shopping and Dinh overnighters.  These last few years my wife has given a bit more of herself, cooking and cleaning and seeing to their needs.

Sadly, Mrs Dinh passed on last year.  She was 85, I believe.  Mr. Dinh, older than his wife, lives on, though with the usual maladies of the elderly.  My wife still visits...shops for food and brings it over and cooks for him when she can.

Soon the story of this marvelous matriarch and patriarch will come to an end.  Surely their story will live on in the hearts of those four daughters.  What manner of love, and dedication must one have to take on the commitment of a "patchwork quilt" of family, brought together by tragedy....and woven ever so tightly with love.

Nothing like a good success story. This is what legal Immigration is all about. You wait your turn, and don't expect a lifetime of handouts by the Government. My Ancestors never took a dime from the Government. And they made it just fine. Time to stoop "babying" these people. Take the perks away, and they'll go home. Sorry to get on a soapbox following such a great story but it opened an opportunity to make a point. Thank you to the Dinh Family.

Nothing at all wrong with making an immigration point, Frank. The Dinh's are a good example of how it should be done. Thanks for your comments.