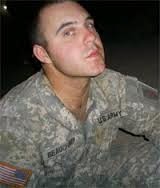 The military honor code proscribes "I will not lie, cheat or steal, nor tolerate those who do".  Former Army private, proven liar, proven cheat, and liberal writer Scott Thomas Beauchamp says the military honor code is outdated.  Further, his latest op-ed for the Washington Post recommends that our American Service academies should be disbanded and not a single tax dollar allocated to these outdated institutions.  Thomas argues that there are plenty of public universities fully capable of turning out graduates with far better attitudes and mindsets than are turned out at the West Point or the Air Force Academy.

I guess, to fully understand Beauchamp's comments, one has to understand who Scott Thomas Beauchamp is.  Beauchamp was an Army private who was sent to Iraq back in 2005.  While there, Beauchamp employed his modest writing skills to write about how contemptible he found his fellow grunts to be.  Under the byline "Scott Thomas", Beauchamp wrote about the American Army's cruelty in dealing with the Iraqi's....how America was the "bad guy" and wasn't worthy of citizen support.

Well, these kind of stories was right up the alley for The New Republic, the preeminent ultra liberal magazine, and "bible" to the Obama-Pelosi-Wasserman Schultz crowd.  They ate it up and published every story Beauchamp could turn out from the war zone.  Problem was, none of the stories were true.  As one after another of these stories were concretely refuted, the New Republic was finally forced to begin an investigation.  After two years of foot-dragging, The New Republic was finally forced to print a retraction for all of Beauchamp's fiction.  (I will not lie, cheat or steal...")

Still, in the liberal world, when the facts come in conflict with the fiction, print the fiction.  So Beauchamp still writes for both the liberal Washington Post and the liberal Atlantic Magazine.

Thus, this past week, Scott Thomas Beauchamp wrote an op-ed calling for the dissolution of the service academies.  He argues that the military honor code is outdated and that the academies themselves turn out mediocre officers with an outdated set of personal ethics that have no place in today's world.

Pardon me if I disagree; we currently have a Commander in Chief who attended Columbia University and Harvard and I'll take the ethics set of our service academies over those of our current CIC any day of the week.  If the lack of ethics and the abject failure of leadership is what America's is shooting for, go with Obama...and those of Scott Thomas Beauchamp.   I think I'll go with an honor code that has worked pretty damn well for 230 years.

Got to admit. It's Idiots like this that keep me sending money to the Republican cause. He(and those like him) have been a big boost to a Party that the Liberals had claimed was all but dead, not that long ago. Keep it up Sluggo and you'll guarantee us the Presidency in two years...

Good morning, Jilly. Frank, I think you might be right; we might be gaining a few followers after what has happened this past year with the liberal crowd.

So let me get this straight. This turd lied about the substance of his stories which was proven and now he's "checking" others credibility. Really, these libturds have no honor. they lie and when confronted with facts they continue their bullshit lies. I agree, I'll back our Military people any day of the week ove our POS President.

There's no explaining the liberal mind, Brian. I've never been able to figure them out either.