The Gospel According To Liberals 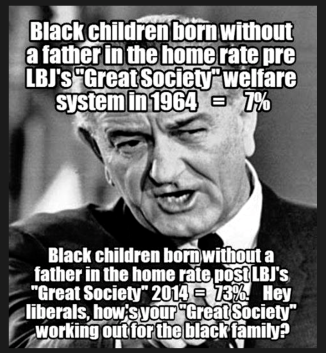 The Gospel According To Liberals
Genesis, Chapter 1: In the beginning there was "work for sustenance". Mankind was required to toil for his livelihood. Nearly every healthy being was out working for a living...far too busy to whine, cry, riot, plead for the wealth of others. People, though not cared for from cradle to grave, had the supreme freedom to pursue their dreams and know if they worked hard enough success would come...but then how fun is that? So, JFK was killedand America gained a President with severe emotional disorders, and a god complex, and wanted to be worshipped.

So he implemented a series of government giveaway programs that in his own words "would guarantee the "nigger vote" for the next hundred years. And there was light! Light work, light education, light effort and heavy, heavy government spending and a $18 trillion dollar national debt. And the end of the American work ethic, and the end of the nuclear family, and the beginning of sloth and the plague of "victimhood" where bad life decisions are simply no one's fault. And:
Most of the Great Society was designed to fight LBJ’s War on Poverty, the total cost of which has been the sum of $22 trillion in current dollars, as reckoned by the Heritage Foundation. (and $100 trillion total municipal and state and federal dollars). The tally rises by about $1 trillion a year as more than 80 overlapping means-tested federal programs sap resources the country does not have. The $22 trillion figure is “three times the amount of money that the government has spent on all military wars in its history, from the Revolutionary War to the present,” says Heritage’s Robert Rector.
What do we have to show for all this federal largesse? The poverty rate hasn’t budged. Instead, we’ve seen the rise of multigenerational welfare dependency. For the $2 trillion the federal government has spent on education since 1965, test scores have plummeted and the achievement gap between minority students and their peers has barely budged. Families, the bedrock of an authentically great society, have suffered most in LBJ’s great social experiment. The overall out-of-wedlock birth rate has ballooned from 8 percent in the mid-1960s to more than 40 percent today; from 25 percent to 73 percent among blacks.
Finis.....
Posted by A Modest Scribler at 2:00 AM

Duly noted but the problem as I see it, is that there hasn't been a President(or Congress or Senate) since 1964 that has tried to stop all the madness. It's easy to blame Johnson but I blame "business as usual". And it will continue on until we're bankrupt. When is someone going to say, "let's cut Welfare"? That's why I voted Ross Perot. He was a businessman and NOT a Politician. That's what makes Dr Carson appealing. Not his skin color but the fact he's "not one of them", though I'd prefer a Businessman.

Frank, the Republican's Contract with America and the Welfare Reform Act of 1994 was a success...for awhile. Obama repealed many of the tenants of that law (by executive order no less) BUT it was a valiant effort.

The Dim party has based its very existence upon the racial divide in America, which leads to the financial disparity. The Dims call it 'income inequality'. In reality, it is the product of years of parasitic behavior by the black that demands "to be taken care of" and the pols that cater to it for the votes. Thing is, with only 17-19% of the population (and not all blacks vote as a block, though damn close to it), they don't have the clout to elect anyone. It REQUIRES the willing assistance of guilt-laden whites, who dutifully go to the polls every election cycle and engage in personal expungement by voting for candidates they know deep in their hearts are nothing more than race hustlers. This cycle will never be broken - the sides are too entrenched. The blacks (and it is a black thing - Asians prize education, and Hispanics are the hardest working minority of all) that discover education combined with effort have the veil of dependency lifted front heir eyes - and you get the Sowells, the Carsons, and the Thomas' of this world.

Randy, the log jam will be loosened when the money runs out and we head for that inevitable second Civil War.