"Marching On Our Belly"

The other day our friend, Jerry, expressed his appreciation for my documenting some of the more mundane aspects of military life overseas.  So I thought I'd talk a little today about military rations.

First of all, it was Napoleon who said "an army marches on its stomach"...if that's true perhaps that's why we weren't victorious in Vietnam.  While those grilled ham and cheese sandwiches were certainly delicious, it's a little inconvenient to pack a Vietnamese "cougar" around in case you get hungry.  So, lots of time we relied on C-rations for our sustenance.   I guess the only thing I can say about being able to thrive on C-rations is that, when I deployed to Vietnam I was a strapping 6ft 1, 200 pound young growing boy.  And when I returned from my first Vietnam tour I weighed 148 pounds and my older brother shuffled me off to a bar and demanded to know how long I'd been hooked on drugs.  Only when I slid off the bar stool and drew my fist back to punch him was he convinced that I didn't do drugs.

The problem with that first tour is that the military had decided, as a cost saving measure, that we had to plow through case after case of rusty can "K-rations" that were a decade and a half old.  Well, I knew guys that trembled in fear every time the plucked a box of those Korean era rations out of the case, then just tossed them and went hungry.  At some point, late in my first year, we finally started getting "C-rations", rations that had been prepared sometime in the decade of the sixties.  Alas, 90% of these too were inedible.  To illustrate, here's an "up close and personal" of the Ham and Lima Beans unit:

I've seen better looking chow on the floor of a Saigon bar after a grunt has put away too many beers.

The food pack you see at the top was the Beef/In Spiced Sauce.  Believe me, there were no spices, just four slabs of pre-formed beef patties in a congealed sauce.  I can't begin to describe it....taste and the offensive slimy texture made it inedible.  Equally distasteful were the "ham slices" another congealed disaster that simply weren't edible.

And the powers that be thought it would be nice to put together a meat portion called "Turkey Loaf".  Again, this was a congealed, nasty pack of preformed turkey that left you shaking your head at the first nasty bite: 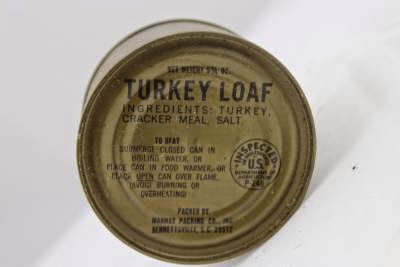 There were some of the meat units that weren't terrible.  The spaghetti and meatballs were edible and the beans and wieners were good, both units being prized "gets" if you were lucky enough to draw either of these.

Perhaps the worst of all were the ham and eggs...they consisted of slimy chopped up ham mixed into a gag-worthy mess of powdered egg mixture.  I know of no grunt who ever ate that unit...if you got the ham and eggs you just went hungry for that night.

To accompany our marvelous entrees, we had little tins of hard tack crackers, even tinier tins of pimento cheese whiz, or cheese wiz "unflavored".  The problem with the crackers is that they packed them in the same can with two little round disks of inedible chocolate, so the crackers always tasted like chocolate and the crackers were successful in drawing whatever moisture existed in the chocolate disks, making both inedible.  (No doubt Uncle Sam was contracting out to the lowest bidder on this stuff!)

The device just below the little tin of peanut butter is known as a P-38...the greatest invention known to man, in my mind.  I still carry one of these on a key chain and I can open a can in seconds flat with that baby.  (The story of it's invention is worth a whole nother blog.) 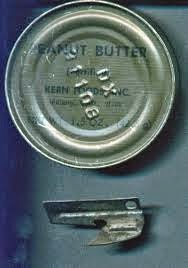 You might be interested in what Uncle Sam wanted us to have..and packed in that little C-ration box: 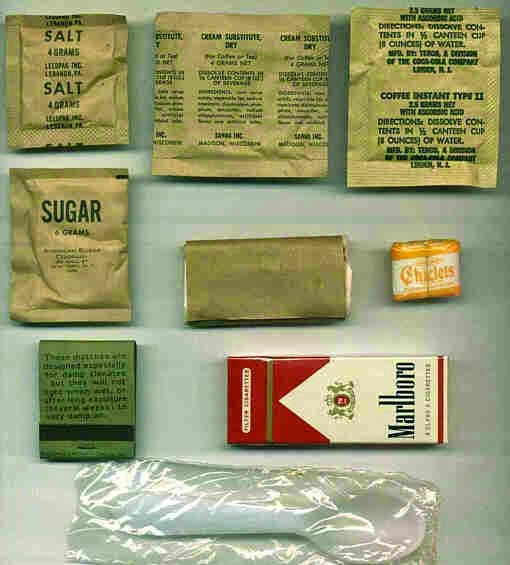 The above "accessory pack" contained salt, sugar, powdered cream, instant coffee, two Chiclets, a pack of matches, a plastic spoon, a 4 pack of various American cigarette brands, and last but not least, a little bundle of toilet paper, something you will surely need if you eat the rations. 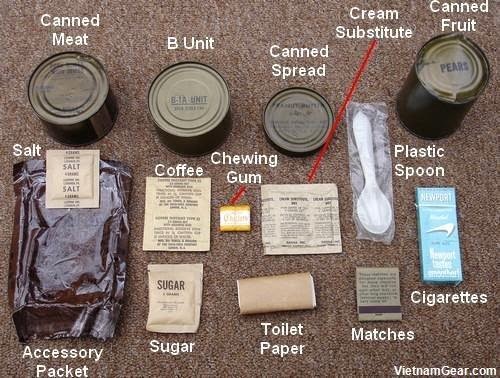 One last note:  Our base did indeed have a chow hall, but most of us working night defense on the base found it hard to get to it for meals.  We got off duty in the wee hours of the morning, slept through lunch and the jungle heat curbed our appetite until late at night when it cooled down a bit.  Besides, on those rare occasions when we did go, we faced disaster.  One morning the chow hall served a huge batch of powdered eggs (Uncle Sam just couldn't seem to manage fresh eggs in a war zone) that were bad.  So bad that 320 of us came down with Ptomaine poisoning.  (Yes, I inexplicably showed up to eat them).  That mass poisoning fostered a crisis of the first order.  Our Base Commander had to send out an emergency call for reinforcements from other bases and brought them in for three days until we could get back on our feet.  Except for Christmas and Thanksgiving I never again set foot in that chow hall.

Though the C-rations were nasty, at least they didn't try to kill us!

Final note:  I didn't get many comments on all this military minutia so I'm assuming, other than Jerry, some of you are bored to death by this stuff...so I'll fore go writing any more about it.
Posted by A Modest Scribler at 2:00 AM

It is always interesting what people comment on or whether they bother at all. This is stuff I have ever really known and I find it interesting. In time of war I think civilians should be eating the very same diet as our soldiers. Times have changed. We have wars now, people getting killed and we are not even aware of it. Not like the '60's, today's wars do not even make the evening news.
It seems like we need the adrenalin rush of Enquirer type news and headlines to arouse us and even then we would rather watch the video than, God forbid, actually have to read something!
Sometimes it is the mundane and picayune of life that really influences us. If we don't know "stuff", how can we make decisions?
I see the chow halls as shown on television, even see the President (any President) bring the troops a turkey and assume our service people are well taken care of. Until the V.A. scandal broke and when people were blissfully unaware, it was assumed that we did a pretty good job taking care of our Veterans. We "see" communities building brand new housing for the disabled veterans and we think "everything is OK". I think we are supposed to think that. We are getting used to the idea of abstract war in places we can not find on a map, about issues we are unfamiliar with and at a cost we know nothing about.
My brother served in Vietnam, some kind of special operations crap and,
over 50 years later, he will not tell me of one day there! Like 3 years of his life totally erased. I think there is a cost to this also but, not having that experience, I do not know what that is.
I feel like a fool when I say, "Thank you for your service" when I have no idea what that means.

Good summary and reminder; not to mention an accurate assessment.

I wouldn't have lasted 5 days on those rations. I grew up with an Italian Mother who REALLY knew how to cook so eating crap like that would not have done it.I thank my lucky stars every day.

Thanks, Jerry. During Vietnam, when we had the draft, there were certainly enough folks from the general populace who participated and understood what military life was like. Not so much today because of the all volunteer force.

And yes, the President showing up on TV sharing a big plump brown turkey is a bit misleading. The other 363 days outside Thanksgiving and Christmas sucked pretty good. :)

Hey Unknown, sounds like you've been there, done that. So you know! :)

Frank, we had guys from places where spicy foods were part of their diet. Like guys from Louisiana who packed little miniature bottles of hot sauce in an effort to doctor the stuff. Didn't help much.

Dog and cat food looks more appetizing than the stuff in that picture.Giving anybody that to eat is wrong, especially our Military. With the obese problem we have in this country maybe the govt. could distribute any leftover quantities to the size challenged population, just an idea.

I just had to laugh at that, Craig! Yeah! Put that stuff in the Food Stamp program and see what it does for obesity rates!

Yep remember them well. I also carry my p-38.
Will try to remember to post so you do not feel so alone.
Corky
P.S. I eas'd when mre's were just coming in now that as edible

I had a couple of MRE's, Corky. They are better than the old C-rations but still not that good. I hear they are doing a lot of research up in some labs in Illinois or somewhere...trying to inject taste in the meals. Guess it's hard when it has to stand up to extreme temperature ranges and such.

My father was a Korean war vet that stayed in the reserves. When he did his 2 weeks a year active duty, he used to bring me and my brother C-Rats. We thought that was the coolest food in the world.

Glad you liked them, Randy.

I for one thoroughly enjoy these military remembrances. I've just been up north hunting the last few days and am only catching up now.

I enjoy all of your writings. I only post when it hits a nerve, mostly political crap. I laugh and sometimes just nod or shake my head at some of your stories. Keep them up we all enjoy them.

Been carrying a p38 for 11 years since my son started Boy Scouts,

Proud parent of an Eagle Scout.

Thanks, Brian. I was one merit badge short of Eagle Scout...always regretted not finishing it up.

Good for your son.