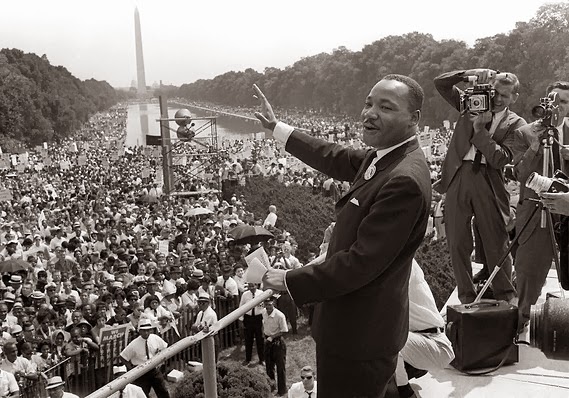 I read a sad thing last week.  Someone was doing a survey of Black urban youth and what they knew about Martin Luther King.  Sadly, when asked, many referred to a Martin Luther King Boulevard that exists in nearly every major city in the nation.  Others answered "he be the dude the honky's killed."  While some knew who King was, few could correlate King with his great "I Have A Dream" speech, or the historical "Letter From A Birmingham Jail."

It's also sad that few Blacks today adhere to Martin Luther King's teachings.  After giving his own life to advancing the education of Black youth, what would King think of the 50% of Blacks who drop out of high school and never finish?  After asking for fair play in the work place what would King think about the three generations of Black victimhood?…the gaming of our social welfare system where a mere twelve percent of the population eat up .43 cents of every welfare dollar spent?  What would King think of urban ebonics, two hundred dollar Michael Jordan tennis shoes and Black adoration of Black rap thugs?  What would he think about Beyonce springing for a million dollar birthing suite to have her baby while millions of Blacks live in poverty?

But we have to congratulate Dr. King.  His birthday is now a commercial event.  As with those President Day sales, where no one stops to give a thought to either Washington or Lincoln, (too busy shopping), retailers are now exploiting King's birthday for the almighty dollar.  Just take a look at next week's coupon codes as internet retailers will sell you clothes, shoes, and cheap TV's if you'll just enter "MLKOFFER" at checkout!

Blacks, again, are not immune to commercially exploiting Dr. King.  Black oriented media are pimping Hennesey Cognac and all manner of commercial goods, all in the name of their modern day prophet.  No doubt, somewhere in America, someone is marketing a Martin Luther King Chia Plant, god help us all.

No, sadly the modern Black has no recollection of a Martin Luther King, or a Medgar Evers or a Rosa Parks…people who stood proudly on their own two feet and asked only for a seat at the table.  This is the era of Barack Obama, the man-child, the pampered Black, the "milk chocolate" Black who talks so pretty but is content to live off the generosity of others, the entitled one by virtue of his skin color, the "gamer" who incited class and race warfare to win a second term.

No, this is an era where any Black who promotes the concept of personal responsibility is ostracized from his own race for daring to challenge ignorance, laziness and sloth and folks like Thomas Boswell or Dr Ben Carson or Allen West are labelled "Uncle Toms" for advocating for strong living and work ethics.

Happy Martin Luther King Day folks…even as he spins in his grave.
Posted by A Modest Scribler at 2:00 AM

Where have you been, missed reading you every morning

Still around….still posting every other day or so. Read my earlier blog on posting schedules, timing, etc.

It is very sad that Dr. King can't see how far backwards blacks have slid since the rise of jackson,sharpton, and the rest of the race baiting blacks.The conservative Dr King is rolling over in his grave, hopefully telling the aforementioned to kiss his ass.

Dr. King stood up for all humans not just blacks. Let's spend Monday honoring him. You have 364 other days to be a bigot.

Yep, anon…libtard confirmed….if anyone dares to criticize Blacks, they're a bigot….yep…Blacks are the "golden race" incapable of doing wrong….

Yep, MLK stood for everyone, agreed, I think the point of this blog is too many blacks of today have taken the low road. If you can't handle that, well maybe you're part of the problem.

Are you simple? That's rhetorical.

I will never understand the "Uncle Tom" accusation. Why would an entire race put their own people down for bettering themselves?

I've always thought they assumed that they'd lose their "culture" if they continued to educate themselves and be prosperous. Talk about having your priorities wrong.

As always, great to read your blogs when I can.

It baffles me too, Trevor…you would think Blacks would celebrate those who overcome life's challenges and succeed beyond all measure…but some seem to like sitting in their own excrement.

On a brighter side, I work in a warehouse(after retirement work) where there's a young Black Lady working for me. She's as hard a worker as anyone(40 hour weeks), studying to be a Nurse(night school) and has a child to boot. She's pleasant, caring and fits right in. It's wonderful to see that not all Blacks have drunk the Jackson/Sharpton kool aid. She wants a better life and I hope she gets there. A true Roll Model...

I've said to my husband a hundred times that M.L.K would spin in his grave he he could see how his peaceful marches have been distorted by today's "activists". 😢

Frank, I have had the privilege of knowing many, many fine Blacks while in the service. There are many. Sadly, few of the good ones will do what is most necessary...stand up openly and condemn that big group of whining and violent thugs who ruin the reputation of all.

Darlene, MLK surely is spinning in his grave.