"Hold The Pickle, Hold The Lettuce..." 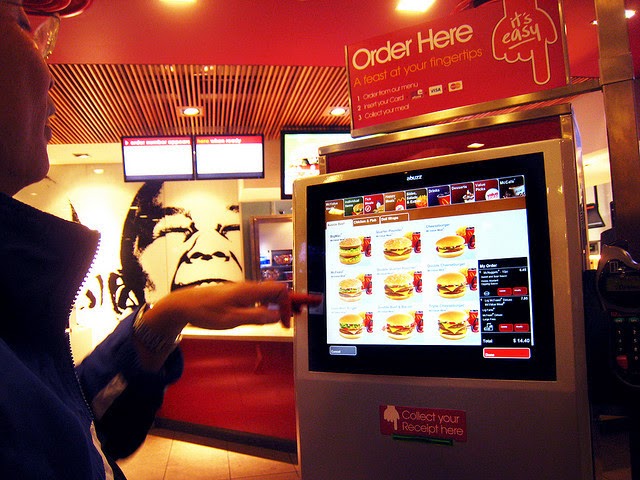 "Hold the pickle, hold the lettuce...special orders don't upset us!"  Anybody over 40 ought to remember that little Burger King ditty back in the 70's and 80's.  The jingle was used to promote the theme that you could "have it your way" at Burger King.

Well, forty years later it looks like, in the world of fast food, the offer of special ordering is going to be true for everybody.    Thanks to the $15 dollar per hour whiners it looks like fast food franchise owners are getting ready to run an end around the losers who, after deciding a high school or college degree was "un-cool", then decided to demand burger flippers be paid career wages.

Well, not surprisingly, these dummies are being replaced by "dumb terminals"....electronic kiosks that send your special order directly to the cook back in the kitchen.  No "middle-man" to screw up your order, no gum smacking teen with an attitude problem to ruin your day....just a few wags of the finger tips and your order is on its way.

While some fast food companies were said to be experimenting with the ordering kiosks, we learned just this morning that CKE Restaurants, owners of Hardees and Carl Jr's. franchises are going all out to immediately install Microsoft ordering kiosks in all their thousands of restaurants nation wide.  I listened to an interview with the CKE Ceo this morning on Yahoo Finance News.  After a demonstration video was shown the news anchor asked the CEO how many jobs could be eliminated with these kiosks.  The guy immediately began dancing around the question; first saying, "well, none at the moment as we move through the transition".  However, when pressed, he did admit that self ordering would significantly reduce employee costs...then said, the machines are even better at "up selling" than their teen human counterparts.  CKE says they anticipate the kiosks paying for themselves within months, not years.

While Burger King and McDonalds, with far more franchises, will take a bit longer to integrate ordering kiosks into their operations you can be assured electronic ordering is the wave of the future for the fast food industry.

Perhaps the technology might have taken a little longer to develop had not the burger flippers not climbed on their high horse and demanded fast food owners subsidize their poor education and career choices....but the time has come.  The "47 percenters" and the "occupy" crowd can lay down in the parking lots all they want...it won't help...their jobs have been farmed out to a dumb terminal with about as much computer memory as an 80's Coleco electronic game.....and sadly, smarter than the 30 something child breeder who wants Mickey D's to pay for her mistakes.

Sad it took this long to get the smart order system in place, damn sad.

The big losers are the Teens just trying to earn extra money while in school. Immigrants have taken over that career for the most part(thank you In and Out Burger for not letting it completely happen) and this will finish it off. In and Outs around here do brisk business because people enjoy being served by English speaking fresh faced kids who have personality and great attitudes. I hope they hold out forever going to kiosks, That would be a crying shame if they switched.

Glad you are back!

Not fully "back", yet, Jilly. Flu still has a grip on me but might have begun turning the corner today. Hopefully, soon.