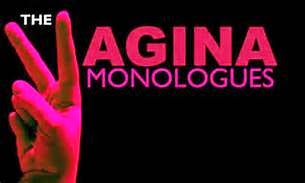 Preface:
For those who don't know, The Vagina Monologues is a play about how a woman's vagina is her spiritual center, her place of empowerment, and the part of her that all other facets of life revolve around.  It has become a cult classic among the liberal set and nearly every actress of note has taken a shot at performing it.  Ironically, real life seems to be playing out around this play, and may now reflect our new political culture.


Tuesday morning millions of American women will go to the polls and vote their vagina.  Sounds crazy, huh?  Absolutely true!  In fact, all of this last weekend Democrats will be hitting the stump to warn women that, if Republicans win, they will lose their free birth control and right to abortions.  In Colorado Senator Udall has become so desperate to regain his Senate seat that he's paid for a commercial telling voters to stock up on condoms because, if his opponent wins,  condoms will be banned in the state of Colorado.

When a politician can offer no solutions to our current problems, when a politician's performance in office has been so bad, and the results so horrid, they must often fall back on some small hot button issue to distract.  And for six years now the Democrats have been pointing at the woman's vagina and screaming that the vagina is under assault.  If the Republicans won't spring for free birth control pills and taxpayer funded abortions, then they are assaulting your vagina.  And it's worked quite beautifully, until now.

Now, a few women are losing focus on the vagina and wishing someone would ease their mind about job losses, home affordability, finding their college sons and daughters jobs so they can move out of the basement,  dealing with the ISIS threat, educating their children better and making college more affordable for their kids.

So, some women, now distracted from their vagina, intend to go to the voting booth and vote Republican for god's sake!  And the Dems just can't let that happen!  While they successfully own the Black vote, keeping them on the liberal plantation, the Black vote is not enough to win them those Congressional seats they covet so fiercely.  Nor are there enough legal Mexicans to win the day.  No, they need those "vagina watchers" in order to stay in office.

There is hope for 2016 though!  There are more than enough "dumb cu*ts" who will vote for Hillary cause she's a woman and she'll be the first President with a vagina and that's all that matters!  And somehow a Republican woman's vagina just won't cut it!  We've seen this country's standing in the world decline in the last six years, we've lived with a stagnant economy, half of our college graduates are living at home and not working, we've lived with greater government intrusions into our personal lives, our health care premiums have soared in order to pay for 30 million Americans who won't pay for their own healthcare, and yet, women by the millions have voted their vagina because someone told them they'll lose their $20 dollars a month free birth control allotment.

Kinda makes you wonder if we should have given women the right to vote, doesn't it?  I mean if women are that fricking dumb maybe those male chauvinist pigs back in the 19th century and before were right after all!

If their whole life revolve around "the vagina monologues" we're all in big trouble.

Who wants anyone to vote that for 5 to 15 days a month can get away with complete crazy and act like nothing happened,don't forget menopause. Airlines kept their hiring cockpits as female free as possible for the same reasons mentioned above and my female ground school instructor completely agreed with their policy.Have a great Monday.

I don't know, Craig. I'm not starting a war on women...just liberal women who vote with their...well, I've already said it.

We have plenty of level headed women, and if there's a female Republican candidate that meets my litmus test on illegal immigration I would probably vote for her. Time to see what a woman can do in that office...just not a liberal.

My Sister, a True Blue Democrat has said she is afraid of Hillary Clinton in the past. Bet when 2016 comes around and it's time to mark that ballot, she votes for...Hillary Clinton. I'd bet my retirement on it. You just can't take the Liberal out of the democrat.

Frank, I think it's more about women voting for women. Unless Hillary makes a few more speaking mistakes she's gonna take it.

Tribalist thinking. That's how they do it, by keeping everybody in their little boxes. Women against men against gays against straights against Whites against Blacks against Browns, et al.

What the hell happened to us all just being Americans? I guess that died a while back. :(

Wraith, it's gotten even worse under Obama...divide and conquer and the hell with us.