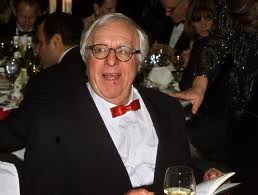 Ray Bradbury passed away this week.  Thankfully, his books live on.  Bradbury was one of those unique writers who could present poetry as prose.  Though he was largely known as a writer of Science Fiction he was far more than that.  Bradbury was far more concerned about the human factor in man's adaptation to the whirlwind changes of science and that was what makes his work so special.

Whether Bradbury was writing about robotic Grandma's or electronic houses he always interjected into his tales the cautionary warning of man's temptation to abandon the humane in pursuit of "progress".

Ray Bradbury was born before radio or TV and thus had to rely on classic literature for his entertainment. Thank God, for some of the most elegant words in print today belong to a man who learned his literature well.   The poem "So We'll Go No More A Roving", by Lord Byron, serves as the inspiration for a Bradbury tale about man's trek to Mars, a planet that 75 years ago remained a mystery.  Bradbury, rather than focusing on the scientific, chooses to explore the ramifications of the human impact of settling two distinct worlds.

I first discovered Ray Bradbury as a young man.  So I was drawn to his writing of a child in high excitement as he prepares to leave earth for life on another world.  He was able to equate that high level of  excitement that a child in 19th century America might have felt as his parents set off in covered wagon in St. Louis as they headed west in exploration of new horizons.

Ray was able to tell his tales, whether they be chilling or reflective, in a marvelous elegance.  Yes, he was inspired by Whitman and Byron and others, but the words were his alone.  While most writers might write
a chilling tale of childhood by saying "Evil Is Coming", Bradbury anoints it with a title like "Something Wicked This Way Comes" and he's got you in the palm of his hand, spinning out a tale that will leave you with goose bumps in the middle of summer.

Readers even today are enraptured by Bradbury's "The Wonderful Ice Cream Suit", "The Illustrated Man", "I Sing The Body Electric", "The Sound of Thunder" or "The Day It Rained Forever".

I'm going to miss Ray Bradbury but thankfully we can still "go a roving" through all the magical places he created for us over the years.

Posted by A Modest Scribler at 7:13 AM