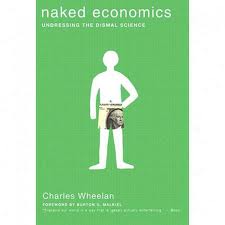 Most of us who took Economics in college during the last forty years undoubtedly remember Paul Samuelson's classic texts for both Econ 101 and Econ 102.  The books were marvelous; they somehow were able to bridge the gap between boring gruel and enlightened learning.  I really appreciated the effort Samuelson made toward keeping me interested enough to actually grasp the foundations of economic thinking.

Most of us who have long since left our college years feel no inclination to return to those classic Samuelson's texts to refresh their knowledge of economics.  But if you're wishing you could understand what's been happening in our economic world during the past few years you just might really enjoy Charles Wheelan's "Naked Economics, Undressing the Dismal Science".

Charles Wheelan is a former correspondent for the Economist magazine so has learned to cull "education speak" from his writings, thus making his writing pleasurable to the casual reader.  He now teaches at the Harris School for Public Policy at the University of Chicago but don't hold that against him.  The reader will, at times, accuse Wheelan of promoting either liberal or conservative economic views, by turn.  That's a sure sign that you're getting at "the truth" of things and Wheelan certainly delivers.

If you're looking for charts and graphs and ice-cold economic theory in Wheelan's book you'll be disappointed; there's not a single up or down arrow.  What you'll find instead are some brilliant examples of hard world realities about such manner of subjects as the North American Free Trade Agreement (NAFTA) and the myths associated with a nation's labor pool.

In the first chapter Wheelan recounts how Coca Cola came to claim a huge market share in Eastern Europe following the collapse of the Berlin Wall.  Yes, it is funny as hell and if you're not hooked into the book by the time the Coke story is revealed you're just not interested in books, period.  Wheelan's book is chock full of real world examples that make the study of economics fun!  Yes, I said fun!

So folks, if you're befuddled by all of the acronyms and confusing metrics you hear in news reports, if you would just like to more clearly understand the cyclic movement of those George Washingtons in your wallet, if the only bubbles you know come from bath suds and bubble gum you'll appreciate Mr. Wheelan's book.