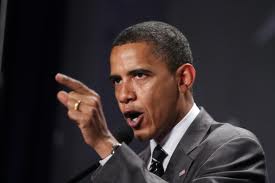 Emperor Barack Obama was angry yesterday.  He didn't get all that he wanted from the Supreme Court on its ruling on SB 1070, the Arizona Immigration Law.  Obama was said to be so furious that he didn't get the Supreme Court to bow to his wishes on Open Borders and Blanket Amnesty that he immediately picked up the phone and called the Director of Homeland Security Janet Napolitano.

Screaming invective against the rogue state of Arizona into the phone, Obama instructed Napolitano to coordinate actions with Attorney General Eric Holder to cease all Federal Immigration cooperation with  all seven of Arizona's law enforcement agencies, city, county and state.

Under the 287G program the federal government had pledged to train and coordinate enforcement actions with respect to illegal immigration with the states.  The Feds had pledged to allow state law enforcement agencies to act as surrogate immigration officers which gave the state's authority to arrest and hold illegal immigrants until ICE could respond and receive these invaders into federal custody.

That all changed yesterday.  Lost in the headlines of the Supreme Court ruling coverage was Emperor Obama's immediate edict to refuse to cooperate with any of the Arizona's law enforcement agencies.

Obama's executive order to cease arresting illegal immigrants and his refusal to receive illegals from Arizona arrests severely restricts Arizona's capability to restore order in a state that has born the brunt of  Mexico's alien invaders.


If anyone doubted Obama's "Chicago Style Thug" training they should clearly have no doubts now about just how Obama operates.  Obama carries within his soul a deep hatred for America's centuries old tradition of honoring both civil and contract law.  He is bound and determined to turn America into a nation of citizens beholden to a socialist state.  He has shown that repeatedly by side-stepping Constitutional checks on Executive power and Arizona has been at the forefront of the battle line between those who opt to sustain an America where the rights of the individual are paramount.

Obama's thuggery in yesterday's actions on 287G illegal immigration enforcement should send shivers up our collective spine.
Posted by A Modest Scribler at 9:25 AM

Actions speak louder than words.
Does he think he is "God"? It's about time he steps down.