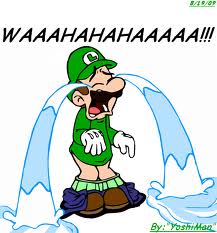 Well, I watched the people of Wisconsin last night give the collective finger to greedy public employee unions.  One CNN reporter at the losing camp was trying to do an on site report was bullied and roughed up by the whining losers.  About ten minutes later that same reporter began an interview of one of the labor union losers but the guy was crying so hard he was almost incoherent.  The only phrase clear enough to hear was "boo hoo...democracy died tonight".    So very trendy of the greedy union leftists; when an election doesn't go their way they run about and cry crocodile tears.  Really pitiful scene.  Looked like a kid in a supermarket throwing a tantrum at mama for denying him the candy bar.

And who doesn't remember the democratic contingent of the Wisconsin statehouse running over to Illinois and going into hiding to prevent a bill already approved by a Republican majority.  That bill, presented to the statehouse by Governor Scott Walker, mandated that Union hogs would be required to pay 5.5 percent of their health care costs and a few percent more toward their piggish retirement plans.

Last night the people of Wisconsin played "mommy" and bitched slapped those selfish brats, telling them enough is enough; we're tired of paying the bill for your cushy retirement and Cadillac health care plans.

Governor Scott Walker's only crime was to carry out the promises he made to the people of the state during his run for Governor.  Unlike other gutless politicians, Walker kept his promises.  In less than a year, by cutting out the piggish public union waste, eliminated a $4.5 billion dollar deficit and turned it into a $150 million dollar surplus.  In doing so he was able to increase spending on education while reducing property taxes for homeowners.

As usual, when leadership is critical, President Obama failed to appear in the state to support the unions.  He was in the area all week.  He flew over Wisconsin twice, once for three fundraisers in Minnesota, and then back again to Chicago where he raised more Obamacash.   But, Obama chose to run and hide when the going got tough.  The Unions are now fuming and there was a lot of punditry last night saying big labor is not going to show up for Obama after he failed to show up for them.

Never mind; the real bravery last night came from the people of Wisconsin.  Democracy didn't' "die" last night, democracy was re-born....and a little fiscal discipline was in evidence too.  As those piggish laborites bawled that their "allowance" has been cut a little, the good people of Wisconsin showed the rest of us how it's done!

Will the people in bankrupt Illinois and California take note?  Time will tell.
Posted by A Modest Scribler at 3:00 AM

I am feeling somewhat restored by this! I don't take much anymore. San Diego and San Jose both spoke their feelings as well on the pension subject if I understand it correctly. Could there really be hope in this hopeless state?? I HOPE so! Now I await the lawsuits in Wisconsin. The death threats just made me sick, it's amazing anybody runs for any conservative position anywhere. BTW I was so happy to see the cute lieutenant guv back there kick her opponents ass, if ever there was a candidate who was left to hang out to dry by her own party it was her, and all the disgusting crap that was said by the democrat talking piles 'o s**t...I do thank God there are still people who will fight this fight and come out with a big smile and positive message, You Go Girl...

I've got a small glimmer of hope that Americans are waking up to the union greed...as well as all those sucking off the government tit.