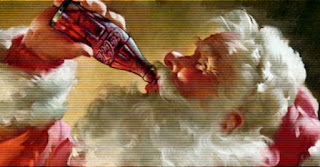 America Incorporated has come out of the woodwork for Christmas, to pimp their product or service.  And, look, if you understand that those sentimental Christmas ads are just jerking you around, that they are playing on your emotions, hey, that's okay.  And if you don't mind that the greedy have co-opted Jesus in favor of materialism, then that's okay also.

But, look, if you are either devout, or even casual Christian, those folks hate you.  Just look at Coke, no longer an American whore, they have gone international in the last fifty years.  So, when Santa ain't around, in April and June, Coke is championing Muslim immigration.  And if I know anything, Muslims absolutely hate Christmas.  During my ten years in Saudi we were like those ancient "catacomb Christians", the ones who hid their masses from the Romans.  That's what we westerners had to do when I lived there.........we celebrated Christmas mass in someone's house in a western compound.

And yet, Coke wants more Muslims here.  And they'll shame the shit out of you if you oppose it.  So don't be fooled by that caravan of Christmas lit Coke trucks.  And, even Santa is just a minor God in Coke's world.......their major god the almighty buck.

Corporate America is damned smart.  They never even show Jesus anymore, nor a cross.  And they've stuffed more stuff down Santa's throat than anytime in history.  They've got Saint Nick driving BMW's and Mercedes and husking for their products.

Folks, Corporate America care less about you than a street walker on Martin Luther King Avenue!  If they did they wouldn't jerk you around, playing on your emotions, and demanding you drop money at the corporate altar.

I enjoy those commercials as much as anybody.  But I have no illusions....I know when they are jerking me, trying to shake the dollars from my wallet in the process.

...AND they don't make enough Money!

They never make enough money, Jerry. That's why they grow into conglomerates with a big hammer to beat you over the head with.